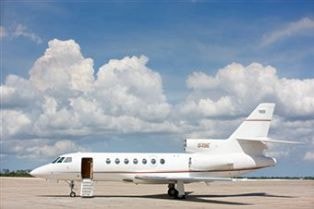 In the modern age, people often travel long distances. Sometimes people travel for reasons related to their work. Sometimes they travel as tourists. And sometimes people travel to visit relatives and friends.
There are many different ways that people can travel. Some forms of transportation move people along the ground. Other methods of transportation move people across the water, or through the air.
Airplanes provide the fastest method of travelling. Modern jet airliners travel at about 1000 kilometres per hour. These airplanes cruise through the skies, almost ten kilometres above the level of the sea. Jet airplanes allow people to travel great distances in a short time. For example, it is possible to fly across a great ocean, such as the Pacific or the Atlantic, in several hours.
Ships were once the only way to travel across the oceans. Before airplanes, it took many weeks or months to travel around the world. Today, many people still travel by ship when crossing smaller bodies of water. Some ships, called ferries, allow people to bring their cars with them onto the ship. Some people also like to travel by ship as part of a holiday. These holiday ships, called cruise ships, stop in several interesting ports along the voyage.
Trains are very popular in many places. In some places, such as Japan and France, trains travel at high speeds of about 300 kilometres per hour. These trains move people throughout the country very quickly and efficiently. Trains are also used to move people over short distances, such as the trip from one’s home to one’s workplace.
Buses and cars are also widely used for transportation. Some people travel by bus or car for only short trips, but sometimes buses and cars are used for very long journeys. In North America, many people have driven across Canada or the United States in their cars. The wide, smooth roads allow cars and buses to travel quickly from one place to another.
There are many different methods of transportation. Which one do you think is the best?

cruise:
to move at a steady speed in a car, aircraft etc
We were cruising along at 50 miles per hour.

ferry:
a boat that carries people or goods across a river or a narrow area of water

cruise:
1
a holiday on a large ship
a Mediterranean cruise
cruise around
a cruise around the world
2
a journey by boat for pleasure

port:
▶WHERE SHIPS STOP◀
[uncountable and countable]a place where ships can be loaded and unloaded
be in port
We’ll have two days ashore while the ship is in port.
come into port/leave port The ferry was about to leave port.

a long journey in a ship or spacecraft
The voyage from England to India used to take six months.
the Titanic’s maiden voyage (=first journey)
I don’t want to make the voyage single-handed
These are the voyages of the starship Enterprise.