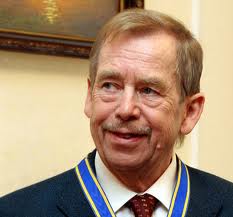 My dear fellow citizens, for forty years you heard from my predecessors on this day different variations of the same theme; how our country flourished, how many million tons of steel we produced, how happy we all were, how we trusted our government, and what bright perspectives were unfolding in front of us. I assume you did not propose me for this office so that I, too, would lie to you. Our country is not flourishing. The enormous creative and spiritual potential of our nation is not being used sensibly. Entire branches of industry are producing goods which are of no interest to anyone, while we are lacking the things we need. A state which calls itself a workers’ state humiliates and exploits workers.

Our obsolete economy is wasting the little energy we have available. A country that once could be proud of the educational level of its citizens spends so little on education that it ranks today as seventy-second in the world. We have polluted our soil, our rivers and forests, bequeathed to us by our ancestors, and we have today the most contaminated environment in Europe. Adult people in our country die earlier than in most other European countries… But all this is still not the main problem.

The worst thing is that we live in a contaminated moral environment. We fell morally ill because we became used to saying something different from what we thought. We learned not to believe in any thing, to ignore each other, to care only about ourselves. Concepts such as love, friendship, compassion, humility, or forgiveness lost their depth and dimensions, and for many of us they represented only psychological peculiarities, or they resembled gone-astray greetings from ancient times, a little ridiculous in the era of computers and spaceships. Only a few of us were able to cry out loud that the powers that be should not be all-powerful, and that special farms, which produce ecologically pure and top-quality food just for them, should send their produce to schools, children’s homes, and hospitals if our agriculture was unable to offer them to all.

The previous regime – armed with its arrogant and intolerant ideology – reduced man to a force of production and nature to a tool of production. In this it attacked both their very substance and their mutual relationship. It reduced gifted and autonomous people, skillfully working in their own country, to nuts and bolts of some monstrously huge, noisy, and stinking machine, whose real meaning is not clear to anyone. It cannot do more than slowly but inexorably wear down itself and all its nuts and bolts. When I talk about contaminated moral atmosphere, I am not talking just about the gentlemen who eat organic vegetables and do not look out of the plane windows. I am talking about all of us. We had all become used to the totalitarian system and accepted it as an unchangeable fact and thus helped to perpetuate it. In other words, we are all – though naturally to differing extents – responsible for the operation of the totalitarian machinery; none of us is just its victim: we are all also its co-creators.