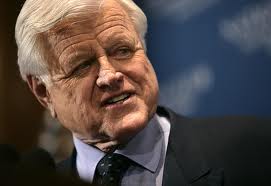 There were hard hours on our journey, and often we sailed against the wind. But always we kept our rudder true, and there were so many of you who stayed the course and shared our hope. You gave your help; but even more, you gave your hearts. Because of you, this has been a happy campaign.

You welcomed Joan, me and our family into your homes and neighbourhoods, your churches, your campuses, your union halls. When I think back of all the miles and all the months and all the memories, I think of you. I recall the poet’s words, and I say: What golden friends I have. Among you, my golden friends across this land, I have listened and learned.

I have listened to Kenny Dubois, a glassblower from Charleston, West Virginia, who has ten children to support but has lost his job after thirty-five years, just three years short of qualifying for his pension…

I have listened to the grandmother in East Oakland who no longer has a phone to call her grandchildren because she gave it up to pay the rent on her small apartment. I have listened to young workers out of work, to students without the tuition for college, and to families without the chance to own a home. I have seen the closed factories and the stalled assembly lines of Anderson, Indiana and South Gate, California, and I have seen too many, far too many idle men and women desperate to work.

I have seen too many, far too many working families desperate to protect the value of their wages from the ravages of inflation. Yet I have also sensed a yearning for new hope among the people in every state where I have been. And I have felt it in their handshakes, I saw it in their faces, and I shall never forget the mothers who carried children to our rallies.

I shall always remember the elderly who have lived in an America of high purpose and who believe that it can all happen again.

Tonight, in their name, I have come here to speak for them. And for their sake, I ask you to stand with them. On their behalf I ask you to restate and reaffirm the timeless truth of our party. I congratulate President Carter on his victory here.

And may it be said of us, both in dark passages and in bright days, in the words of Tennyson that my brothers quoted and loved, and that have special meaning for me now:

‘I am a part of all that I have met/ Tho’much is taken, much abides/That which we are, we are -/One equal temper of heroic hearts/strong in will/To strive, to seek, to find, and not to yield…’ For me, a few hours ago, this campaign came to an end. For all those whose cares have been our concern, the work goes on, the cause endures, the hope still lives, and the dream shall never die.