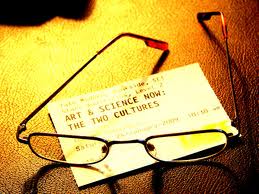 In 1956, English writer and scientist C.P.Snow wrote an essay on “The Two Cultures.” By this, he meant that in the West there is a scientific culture and a literary culture. Scientists do not talk very much to literary men and vice versa. Neither group seems to know, nor want to know, very much about the other. Snow argues that the scientific people and the literary people are moving further and further apart. Few scientists or engineers read literature; very few writers or intellectuals know or care anything about science. This, Snow thinks, is a major problem in the world today. Literary culture seems to be anti-science and anti-technology.

This affects Western reluctance to train more scientists and engineers. The standard of living in the West, and throughout the world, depends on having scientists and engineers. Nonetheless, relatively little effort is given to encouraging and developing these areas of education. Westerners, who are part of the literary culture, do not encourage or understand the scientific revolution. As a result, they are insensitive to the desire of Third World peoples to improve their lives through technology. Snow talks about how the standard of living in England has improved since 1800. Snow’s grandfather did not go far in school, but did learn to read and write.

Living in 1900, he realized that he was better off than his grandfather who lived in the early 1800s. Snow’s great-great-grandfather was a farm labourer who didn’t know how to read or write. Snow feels that a similar transformation could happen even in very poor countries. It could happen in a short time if the West supplied capital and engineers. Snow believes that it is the industrial revolution that has transformed the West. This is what has allowed the farm labourers to go to school and to learn employable skills. In 1800, only a small proportion of society could expect to live well. Now nearly everyone has access to education and training. The same industrial revolution can happen in Third World countries.

It is the only way to improve the lot of the poor. Snow agrees that most scientists and engineers do not read novels or cultivate the arts. However, he doesn’t consider this to be as dangerous as when literary people ignore science and technology. Science and technology are too important to our standard of living to be ignored; our education systems have to be changed to reflect our need of them. Snow’s article was quite controversial.

Not everyone agreed with him that science and technology are being ignored by our educational system. But Snow certainly has a point when he says that scientific people and literary people view the world differently. These two different mindsets often lead to conflict in the workplace. Snow may be right that it is too easy for literary-minded students to ignore science, and scientifically minded students to ignore literature.

he obeys orders with reluctance
her reluctance was obvious

a part of a number or amount, considered in relation to the whole
proportion of
The proportion of women graduates has increased in recent years.Every parent is asked to contribute a proportion of the total cost.
high/large/small etc proportion
The decision affects a significant proportion of the population.
Although the majority of offenders are men, a small proportion – about 5 percent – are women.

to work hard to develop a particular skill, attitude, or quality
Try to cultivate a more relaxed and positive approach to life.

The company has been successful in cultivating a very professional image.
—
controversial

someone’s general attitude, and the way in which they think about things and make decisions
The company seems to have a very old-fashioned mindset.