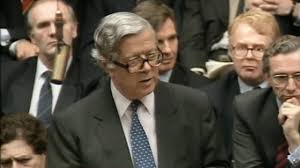 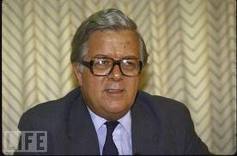 What kind of vision is that for our business people who trade there each day, for our financiers who seek to make London the money capital of Europe, or for all the young people of today? These concerns are especially important as we approach the crucially important topic of EMU. We must be positively and centrally involved in this debate and not fearfully and negatively detached. The cost of disengagement here could be very serious indeed… The tragedy is – and it is for me personally, for my party, for our whole people, for the prime minister herself a very real tragedy – that the prime minister’s perceived attitude towards Europe is running increasingly serious risks for the future of our nation. It risks minimizing our influence and maximizing our chances of being once again shut out.

We have paid heavily in the past for late stars and squandered opportunities in Europe. We dare not let that happen again. If we detach ourselves completely as a party or as a nation from the middle ground of Europe, the effects will be incalculable and very hard ever to correct. In my letter of resignation, which I tendered with the utmost sadness and dismay, I said that cabinet government is about trying to persuade one another from within. That was my commitment to government by persuasion, persuading colleagues and nation.

I have tried to do that as foreign secretary and since, but realize now that the task has become futile, of trying to stretch the meaning of words beyond what was credible, of trying to pretend there was a common policy when every step forward risked being subverted by some casual comment or impulsive answer. The conflict of loyalty is loyalty to the prime minister – and after more than two decades together that instinct of loyalty is still very real – and the loyalty to what I perceive to be the true interests of this nation.

That conflict of loyalty has become all too great. I no longer believe it is possible to resolve that conflict from within this government. That is why I have resigned. In doing so I have done what I believe to be right for my party and my country. The time has come for others to consider their response to the tragic conflict of loyalty with which I have myself wrestled for perhaps too long.

financier
someone who controls or lends large sums of money

crucial
something that is crucial is extremely important, because everything else depends on i

crucial to
This aid money is crucial to the government’s economic policies.
crucial in/to doing something
The work of monks was crucial in spreading Christianity.
play a crucial role/part in something
The city of Mycenae played a crucial role in the history of Greece.
The conservation of tropical forests is of crucial importance.
topics of crucial importance
The next few weeks are going to be crucial.
Winning this contract is crucial to the success of the company.
It is crucial that we get this right.
Parents play a crucial role in preparing their child for school.
He wasn’t there at the crucial moment (= when he was needed most).

debate
discussion of a particular subject that often continues for a long time and in which people express different opinions :

the gun-control debate in the US
The new drug has become the subject of  heated debate  within the medical profession.
debate over/about
There has been widespread public debate over the introduction of genetically modified food.
There was much lively debate about whether women should spend more time in the home.
A fierce debate raged  over which artist’s work should be chosen for the prize.
debate between
the ongoing debate between environmentalists and the road-building lobby over the future of our countryside
Nuclear power has always been a topic that has  sparked off  considerable  debate .
a debate on abortion
The minister opened the debate (= was the first to speak).
The motion under debate (= being discussed) was put to a vote.
After a long debate, Congress approved the proposal.

detach
if you detach something, or if it detaches, it becomes separated from the thing it was attached to  OPP  attach

detach something from something
You can detach the hood from the jacket.
Please detach and fill out the application form.

Detach the coupon and return it as soon as possible
One of the panels had become detached from the main structure.
The skis should detach from the boot if you fall.

attitude
the opinions and feelings that you usually have about something, especially when this is shown in your behaviour :

As soon as they found out I was a doctor, their whole attitude changed.
attitude to/towards
The people have a very positive attitude to life.

changes in public attitudes to marriage
the government’s attitude towards single parents
to have a good/bad/positive/negative attitude towards somebody/something
Youth is simply an attitude of mind.
If you want to pass your exams you’d better change your attitude!
You’re taking a pretty selfish attitude over this, aren’t you?
A lot of drivers have a serious attitude problem (= they do not behave in a way that is acceptable to other people).

The home team squandered a number of chances in the first half.
squander something on something
They squandered the profits on expensive cars.

resignation noun
an occasion when you officially announce that you have decided to leave your job or an organization, or a written statement that says you will be leaving  →  notice :

persuasion
the act of persuading someone to do something :

After a little  gentle persuasion , Debbie agreed to let us in.
It had taken a great deal of persuasion to get him to accept.
She used all her  powers of persuasion  (= skill at persuading people )  to convince Tilly that it was the right thing to do.

It didn’t take much persuasion to get her to tell us where he was.
After a little gentle persuasion, he agreed to come.
She has great powers of persuasion.
I wasn’t intending to sell, but I’m open to persuasion.

a futile attempt/exercise/gesture
Their efforts to revive him were futile.
It would be futile to protest.
My appeal proved futile.

subvert verb
to try to destroy the power and influence of a government or the established system :

an attempt to subvert the democratic process

impulsive  adjective
someone who is impulsive does things without considering the possible dangers or problems first  →  rash :

Rosa was impulsive and sometimes regretted things she’d done.
In a burst of impulsive generosity, I offered to pay.