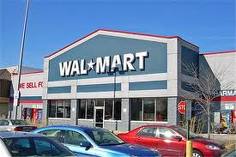 Wal-Mart is now the world’s largest retail organization. Wal-Mart employs around 1.2 million people worldwide. In 2000, Wal-Mart had sales of more than $191 billion, with profits of $6.3 billion. Profits increased 16% from the previous year. People have come to expect that Wal-Mart’s profits will increase substantially every year.

Walton was known for the “Ten Foot Attitude.” This means that any employee should greet any customer who is within ten feet of them. He emphasized that it is important to speak to people before they speak to you. Walton also believed that good deals from suppliers should be passed along to customers. The combination of low prices and friendly service is basic to Wal- Mart’s success. That one store in Bentonville has become 4,203 stores in the U.S.A., plus another 1,000 outside the United States. Walton died in 1992, but his business philosophy continues to be preached at Wal-Marts.

Each store has greeters who meet the customers at the door, and deal with any special needs they have. Having greeters gives the effect of having more service clerks than Wal-Mart really has. Compared to some other department stores, Wal-Mart has relatively fewer employees. Wal-Mart also has the Wal-Mart Foundation, which sponsors numerous good causes. Among their programs are high school scholarship, fundraising for local hospitals and sick children, environmental concerns and community “matching grant’ outreach.

So, what’s not to like about Wal-Mart? The main complaint is that their business style is extremely aggressive. Wal-Mart’s attitudes towards manufacturers and suppliers are: “You do it our way, or we won’t do business with you.” This puts Wal-Mart at an advantage over smaller retailers who don’t have the same retailing power. Wal-Mart has been known to demand that its suppliers provide products at discount for Wal-Mart store openings; levy fines for shipment errors; tell manufacturers what products, styles and colours to make, etc.

Wal-Mart expects product delivery in two days, and expects manufacturers to cooperate with its promotional and retailing strategies. In effect, any company that works with Wal-Mart becomes one of their employees. Any company, which so dominates one area of the market, will have a lot of power. So far, Wal-Mart has been successful in getting what it wants, and providing customers with what they want.

the sale of goods in shops to customers, for their own use and not for selling to anyone else
ￚsee also wholesale
the retail trade/business a manager with twenty years’ experience in the retail business retail outlet/shop/store/chain
We are looking for more retail outlets for our products.
a retail price of £8.99The retail value would be around $500.
Retail sales fell by 1.3% in January.
the retail price of each commodity is higher than its wholesale price
a retail merchant

very much or a lot
ￚsynonym considerably

when help, advice, or other services are provided for people who would not otherwise get these services easily
outreach program/service/center etc

behaving in an angry, threatening way, as if you want to fight or attack someone
Jim’s voice became aggressive.
Teachers apparently expect a certain amount of aggressive behaviour from boys.

Look at these examples:
—
opening
—
dominate

to control someone or something or to have more importance than other people or things
The industry is dominated by five multinational companies.
New Orleans dominated throughout the game.
Her loud voice totally dominated the conversation.
Education issues dominated the election campaign.

Look at these examples: