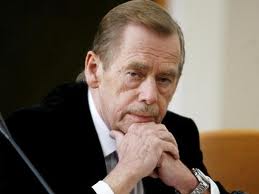 Why do I say this? It would be very unreasonable to understand the sad legacy of the last forty years as something alien, which some distant relative bequeathed us. On the contrary, we have to accept this legacy as a sin we committed against ourselves. If we accept it as such, we will understand that it is up to us all, and up to us only, to do something about it. We cannot blame the previous rulers for everything, not only because it would be untrue but also because it could blunt the duty that each of us faces today, namely, the obligation to act independently, freely, reasonably, and quickly. Let us not be mistaken: the best government in the world, the best parliament and the best president, cannot achieve much on their own. And it would also be wrong to expect a general remedy from them only. Freedom and democracy include participation and therefore responsibility from us all.

We realize this, then all the horrors that the new Czechoslovak democracy inherited will cease to appear so terrible. If we realize this, hope will return to our hearts. In the effort to rectify matters of common concern, we have something to lean on. The recent period – and in particular, the last six weeks of our peaceful revolution – has shown the enormous human, moral, and spiritual potential and civic culture that slumbered in our society under the enforced mask of apathy. Whenever someone categorically claimed that we were this or that, I always objected that society is a very mysterious creature and that it is not wise to trust only the face it presents to you. I am happy that I was not mistaken.

Everywhere in the world people wonder where those meek, humiliated, skeptical, and seemingly cynical citizens of Czechoslovakia found the marvelous strength to shake from their shoulders in several weeks and in a decent and peaceful way the totalitarian yoke. And let us ask: from where did the young people who never knew another system take their desire for truth, their love of free thought,, their political ideas, their civic courage and civic prudence? How did it happen that their parents – the very generation that had been considered as lost – joined them? How is it possible that so many people immediately knew what to do and, none of them needed any advice or instruction? Masaryk based his politics on morality. Let us try in a new time and in a new way to restore this concept of politics.