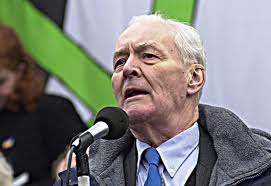 Tony Benn: ‘The Importance of Democracy’ (2)

If people lose the power to sack their Government one of several things happens. First, people may just slope off. Apathy could destroy democracy. When the turnout drops below 50 per cent, we are in danger… The second thing that people can do is to riot. Riot is an old-fashioned method for drawing the attention of the Government to what is wrong. It is difficult for an elected person to admit it, but the riot at Strangeways produced some prison reforms. Riot has historically played a much larger part in British politics than we are ever allowed to know. Thirdly, nationalism can arise. Instead of blaming the Treaty of Rome, people say, ‘It is those Germans’ or ‘It is the French’. Nationalism is built out of frustration that people feel when they cannot get their way through the ballot box. With nationalism comes repression.

I hope that it is not pessimistic – in my view it is not – to say that democracy hangs by a thread in every country of the world. Unless we can offer people a peaceful route to the resolution of injustices through the ballot box they will not listen to a House that has blocked off that route. There are many alternatives open to us. One Hon. Member said that he was young and had not fought in the war. He looked at a new Europe. But there have been five Europes this century.

Friend the Member for Derbyshire, North-East (Mr Barnes). They want an American-type constitution for Europe. It could be that our laws would hang on which way the Albanian members voted. I could not complain about that because that is democracy. However, it is unworkable. It is like trying to get an elephant to dance through a minefield. But it would be democratic.

sack verb informal
to dismiss someone from their job; SYN fire :

because you sacked Jim, how dare you do it?
either Peter would sack me, or I would improve.
hundreds sacked in the credit card war.
I told you to sack Wally before I left, he said.
why sack everything, why go for the total wipeout?

slope off phrasal verb informal
to leave somewhere quietly and secretly, especially when you are avoiding work :
Mike sloped off early today.

Apathy noun [ uncountable ]
the feeling of not being interested in something, and not willing to make any effort to change or improve things :

The campaign failed because of public apathy.
authoritarian management often leads to apathy among employee.
Dimitri Volkov was in a fog of mental apathy and confusion.
then there will come the tears and despair of apathy.
there is apathy within the his departments of major record companies.
worker apathy has been and remains rampant.

There is widespread apathy among the electorate.
Spouse apathy (if not outright derision) is not uncommon in collector households.
Try not to allow their apathy to affect your enthusiasm.
For years, student apathy has been blamed for the low turnout.
Last year we got the news that the new game was in development and a lot of us just shrugged our shoulders in apathy.
Their faces show resignation, apathy and anger.
Just don’t let it turn into apathy and a refusal to learn how things really work.
But too many large neighborhood schools lose students to anonymity and apathy.
Bystander apathy or the power of observation, in and of itself, is not very valuable.
The cure for apathy is comprehension.
It has been an uphill battle because of political inertia and public apathy

frustration noun
the feeling of being annoyed, upset, or impatient, because you cannot control or change a situation, or achieve something :

People often feel a sense of frustration that they are not being promoted quickly enough.
in/with frustration
I was practically screaming with frustration.
In spite of his frustrations, he fell in love with the country.

Dave thumped the table in frustration.
She couldn’t stand the frustration of not being able to help.
sexual frustration

repression noun
cruel and severe control of a large group of people ; suppression , oppression
repression of

government repression
They were fighting against repression and injustice in their country.
brutal repression of members of the Communist party

minefield noun
an area where a lot of bombs have been hidden just below the ground or under water :
They realized they had wandered into a minefield.