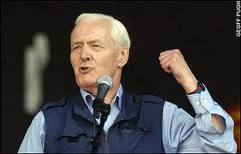 Tony Benn: ‘The Importance of Democracy’ (1)

Some people genuinely believe that we shall never get social justice from the British Government, but we shall get it from Jacques Delors; They believe that a good king is better than a bad Parliament. I have never taken that view. Others believe that the change is inevitable, and that the common currency will protect us from inflation and will provide a wage policy. They believe that it will control speculation and that Britain cannot survive alone. None of those arguments persuade me because the argument has never been about sovereignty.

I do not know what a sovereign is, apart from the one that used to be in gold and the Pope who is sovereign in the Vatican. We are talking about democracy. No nation – not even the great United States which could, for all I know, be destroyed by a nuclear weapon from a third-world country – has the power to impose its will on other countries. We are discussing whether the British people are to be allowed to elect those who make the laws under which they are governed. The argument is nothing to do with whether we should get more maternity leave from Madame Papandreou than from Madame Thatcher.

That is not the issue. I recognize that when the members of the three Front Benches agree, I am in a minority. My next job therefore is to explain to the people of Chesterfield what we have decided. I will say first, ‘My dear constituents, in future you will be governed by people whom you do not elect and cannot remove. I am sorry about it. They may give you better creches and shorter working hours but you cannot remove them.’ I know that it sounds negative but I have always thought it as positive to say that the important thing about democracy is that we can remove without bloodshed the people who govern us.

We can get rid of a Callaghan, a Wilson or even a Right Hon. Lady by internal processes. We can get rid of a Right Hon. Member for Huntingdon (Mr Major). But that cannot be done in the structure that is proposed. Even if one likes the policies of the people in Europe one cannot get rid of them. Secondly, we say to my favourite friends, the Chartists and suffragettes, ‘All your struggles to get control of the ballot box were a waste of time. We shall be run in future by a few white persons, as in 1832.’ The instrument, I might add, is the Royal Prerogative of treaty making. For the first time since 1649 the Crown makes the laws – advised, I admit, by the Prime Minister.

We must ask what will happen when people realize what we have done. We have had a marvellous debate about Europe, but none of us has discussed our relationship with the people who sent us here. Hon. Members have expressed views on Albania and the Baltic states. I have been dazzled by the knowledge of the continent of which we are all part. NO one has spoken about how he or she got here and what we were sent here to do.

speculation noun
when you guess about the possible causes or effects of something without knowing all the facts, or the guesses that you make

There was widespread speculation that she was going to resign.
His private life is the subject of much speculation.
Today’s announcement ends months of speculation about the company’s future.
The president’s absence led to speculation over his health.
She dismissed the newspaper reports as pure speculation.
Our speculations proved right.

maternity adjective
relating to a woman who is  pregnant  or who has just had a baby  →  paternity :

‘How was your holiday?’ ‘Marvellous!’
We had a marvellous time.
I can’t stand him, but my wife thinks he’s marvellous.
It’s marvellous  what they can do these days.

This will be a marvellous opportunity for her.
The weather was marvellous.
It’s marvellous what modern technology can do.

As children, we were dazzled by my uncle’s good looks and charm.
He was dazzled by the warmth of her smile.

continent noun
a large mass of land surrounded by sea :