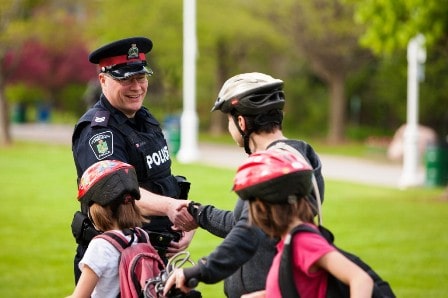 My mother always told me that if I was lost I could go up to a policeman and that he would help me to find my way home.
I never did get lost, but I always remembered what my mother told me about the police.
I think policemen look very nice in their uniforms.
I see police officers drive by in their police cars.
In my town we even have police officers on bicycles.

Policemen and policewomen have a job that can sometimes be dangerous.
They have to catch people who break the law.
Sometimes, they have to chase people or try to calm people down.
To be a police officer you need a lot of training.
It is important to be able to deal with people effectively.

A police officer came to our school.
He had a police dog with him.
The officer showed us how the dog could track down criminals.
The dog was very smart.
He could even find things that were hidden.
Criminals sometimes hide things that they don’t want the police to find.
The policeman told us that he and his dog were partners.
His dog lives at his house with the policeman and his family.

Sometimes I see police cars on the side of the road.
The police stop people who are speeding or are not wearing their seatbelts.
The police officers warn people or give out tickets.
Sometimes they even have to arrest people.
Police officers are just doing their job when they arrest people.
Some people need to be arrested and put in jail to make it safer for the rest of us.