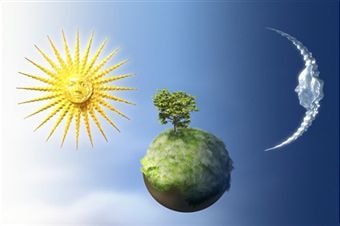 The Planets of Our Solar System

The planet on which we live is called the Earth. Our planet is constantly moving around the sun, and each year, the Earth travels all the way around the sun. But there are many other planets that also travel around the sun. Together with the sun, the planets, and various other bodies, the Earth is part of our “solar system.”
The planet that is closest to the sun is Mercury. Mercury is extremely hot, and it is much smaller than the Earth. The second planet from the sun is Venus. Venus is about the same size as the Earth. Venus is also very hot.
The Earth is the third planet from the sun. The Earth is unusual among the planets, because it has such a large moon. The Earth is bigger than the moon, but the moon is still quite large. It takes about one month for the moon to travel around the Earth.
The fourth planet from the sun is Mars. Mars is known for its red colour. Mars is smaller and colder than the Earth. Mars has two very small moons. After the planet Mars, there are many small bodies called the asteroids. These rocky objects are much smaller than planets.
The first four planets are all made of rock and metal. The remaining planets, however, are mostly made of frozen gases.
The fifth planet is called Jupiter. Jupiter is the largest planet. It has many moons that travel around it, and it also has a large red spot. The sixth planet is called Saturn. Saturn is the second-largest planet, and it is famous for the wide “rings” that surround it. These rings are made up of many smaller objects that are found in the same area.
The seventh planet is called Uranus. The eighth planet is called Neptune. These planets are also gas giants, but they are smaller than Jupiter and Saturn. Both Uranus and Neptune are so far from the sun that scientists only discovered these planets during the past few hundred years, using telescopes. The other planets had all been visible to curious people for many thousands of years.
The ninth planet is called Pluto. Pluto is very small, and it is much more rocky than the gas giants. Some scientists believe that Pluto is not really a planet at all. They suggest that Pluto is the largest of many asteroids that are found at the edge of the solar system.
The solar system is a vast place. So far, people have not travelled beyond the moon. But perhaps someday, human astronauts will visit the other planets of our solar system!

asteroid:
one of the many small planets that move around the sun, especially between Mars and Jupiter