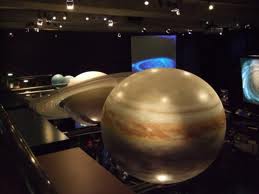 All around the world stargazing is a popular activity. The night sky lit up with stars is one of the most impressive scenes in nature. Besides its natural beauty, people study the night sky for many reasons. Some believe that they can read the future in the stars. Others think that the stars influence the weather, while some people worship the stars and the planets.

There is a problem with stargazing. If the night is cloudy, people on the ground cannot see the stars, also bad weather makes being outside at night uncomfortable. Besides, not everybody wants to stay up late at night.

A planetarium is an ideal solution to all these problems. A planetarium is usually a large dome-covered building. It has seating like a theatre. The program here is a star show. A special projector throws a picture of the night sky on the ceiling of the planetarium theatre. Like a movie projector, the planetarium projector can show a constantly changing program. It can show how the stars look right now, how they looked thousands of years ago, and how they will look in the future.

Planetariums can be both entertaining and educational. School children can go to learn about the nine planets of the solar system, or about the various groupings of stars. Planetariums can teach you how to find the stars and planets yourself when you are out at night. There can also be dramatic showings about changes to the universe over time. This is also a way to view special phenomena, like Halley’s Comet, which only appears once in a lifetime.

Planetariums can also show how ancient people viewed the skies. Shepherds, living out under the sky, imagined that groups of stars represented wonderful people and huge animals. Stories were told about these constellations. Sometimes, the story explained how the people or animals became stars. For example, why Orion, the mighty hunter, is chasing Taurus the Bull. Planetariums can project these figures on their screen.

Special heavenly phenomena, such as a meteor shower, can also be demonstrated. Things that appear only rarely in the real sky can be shown every night. A planetarium is usually concerned to put in special programs to keep its audience coming back. Since the heavens are always moving and changing, there is no shortage of ideas for programmers.