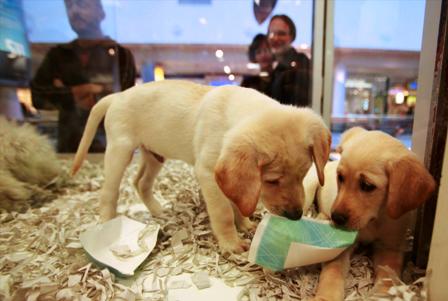 On Saturday, my parents took us to the pet store.
They had everything that you would need if you had a pet.
They had dog food, collars and leashes for dogs.
They had treats to give your dog, and brushes to brush your dog.
For cats, they had food, toys, and litter boxes.

For birds, they had seed and cages.
There was a section for fish.
They had fish in big tanks and little bowls.
In the big tanks, there were colourful fish swimming around.
The girl who worked there said that they were tropical fish.

There were goldfish in the smaller fishbowls.
I saw the girl get a goldfish out with a little net.
She sold it to a boy who said he had another goldfish at home.
There was a very large cage with a parrot in it.

I walked up to the cage, and the parrot said “hello.”
I was surprised that the parrot could talk.
It could say a few things.

It said, “I love you,” “pretty bird,” and “bye-bye.”
I told my mother that I would like a parrot, but she said that parrots need a lot of care and attention.
At the back of the store there were some puppies.
They seemed glad to see me.

I stuck my hand into the cage, and one of them licked my hand.
They were very lively.
They were running around and chasing their own tails.
In the next cage there were two kittens.

One of them was playing with a toy, and the other one was asleep.
The kittens were very small.
The one that was sleeping was curled up into a ball.

I couldn’t even see her face.
I didn’t want to leave the pet store.
I was wishing that I could take all of the animals home with me.