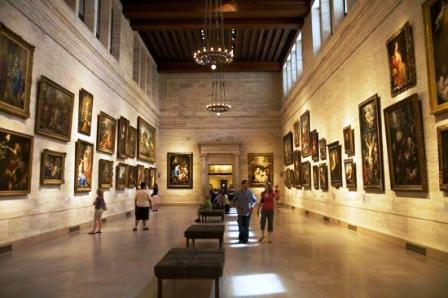 The museum was very interesting.
There were so many things in the museum that I would need more time to really see everything.
There were clothes from the past.
I don’t know how people wore some of those things.
They look like they would be uncomfortable.
I like to wear my jeans.
There were things from wars.

There were bullets, and cannons and even uniforms from the soldiers.
I don’t think that war is a good thing, but it is good to remember the past and honour the people who died for your country.
There was an old fire truck at the museum.
This fire truck was pulled by a horse.

There were some very old photographs of the firemen putting out fires.
There were rooms in the museum that were set up like an old house.
There were antique irons and sewing machines.
The women used to clean the clothes with a washboard.

I was fascinated by those.
There were artifacts from the Indians.
There were arrowheads and cradles that the babies slept in.
I tried my best to see everything, but it was almost impossible.
The museum is a good place to learn about your past.
I tried to imagine my grandparents using some of the things that were on display at the museum.