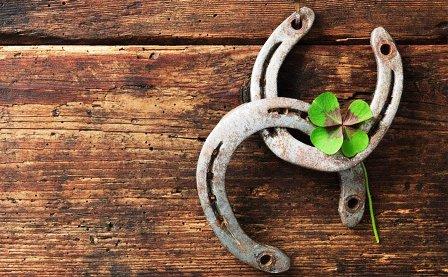 I am not superstitious, are you?
Yesterday was Friday the thirteenth.
Some people think that Friday the thirteenth is an unlucky day.
I think that it is just like any other day.
Some people believe that if a black cat crosses your path, you will have bad luck.
I don’t believe that either.
My mother always gets upset if I open an umbrella in the house.
She says that it is bad luck.
She is probably right about that one because an open umbrella would take up a lot of space, and you might knock things over.
If your left hand is itchy, you are supposed to get money.
I have had an itchy left hand before, but I haven’t received any money because of it.
It is bad luck to walk under a ladder.
This is probably true because you might knock somebody off the ladder, or have a can of paint fall on top of you.
If you are acting in a play, it is bad luck if someone says “good luck” to you.
This is very confusing.
You are supposed to tell an actor to “break a leg.”
It doesn’t mean that you want the actor to break his leg.
It means good luck to the actor.
Actors have a lot of superstitions that are very unusual.
I am not superstitious.
I don’t believe in superstitions at all.
It is just fun to learn about superstitions.
Some of them are very old and have been passed down from generation to generation.
I once did a project at school on superstitions.
It was a very interesting topic, and I got a good mark for it.

Superstition
a belief that some objects or actions are lucky or unlucky, or that they cause events to happen, based on old ideas of magic
– the old superstition that walking under a ladder is unlucky

(a) belief not based on reason or fact but on old ideas about luck, magic, etc. CULTURAL NOTE Some common superstitions are: it is unlucky to walk under ladders, or to break a mirror. If someone spills salt they should pick a little up and throw it over their left shoulder into the face of the devil. A black cat crossing one’s path is unlucky. In the theater, rather than saying “Good Luck” one should say “Break a leg”. Also in the theater, Shakespeare’s play Macbeth should be spoken of as “the Scottish Play” and not by name. —see also LUCKY, UNLUCKY

itchy
having,feeling  or causing an itch.
– dry, itchy skin.
– I felt itchy all over.
– rough itchy woolen socks.
– My eyes sometimes get red and itchy in the summer.
– These tights are all itchy.