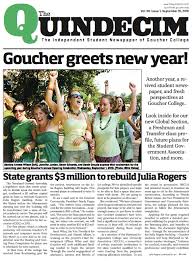 In North America, most colleges and universities, as well as many high schools, have a student newspaper. These newspapers focus on happenings at the school. They inform the student population about activities on campus and often include world news, which is relevant to student interests. In addition, there are opinion pieces by the student editors, which reflect their views on the school and the world. Sometimes these editorials oppose the way that the school is being run. Occasionally, school officials will try to shut down or censor student papers, if they find their writing embarrassing or offensive.

But usually these disagreements are resolved by discussion. At some colleges, the student newspaper is connected to a professional program in journalism. But, most of the time, the idea behind the paper is to get students to research the facts, debate the issues, and learn how to get their opinions expressed. If these students go on to become professional journalists that is fine, but it is not really expected. You might wonder whether enough things happen at a college to fill out a weekly paper. Yes, indeed! Schools and universities reflect the real world. There are often problems with the budget and cuts to programs.

New buildings go up, or are torn down. Policies change; tuition goes up; classrooms become crowded; and personnel come and go. University morale and funding often reflect government policies and social attitudes. These tie the college to the larger world. Editorials often comment on how national and world events affect the university. At the same time, there are many things going on within the university.

Construction disturbs classes; offices are broken into; computers are stolen; accidents happen in the parking lot; students die on the roads during the holidays; sports teams win or lose; graduation takes place; students and instructors win awards; plays are put on; distinguished visitors speak; rock bands are in concert. Then there is always the question of student rights and responsibilities. What kinds of student behavior are unacceptable? Should the university pay attention to student activities off-campus? Committees meet, with student representation, to set guidelines for these matters. Another issue is who sets the agenda for the university.

Corporate sponsors today are buying exclusive rights to distribute their products on campus. Governments are expecting universities to follow official policies in order to receive funding. Social groups are demanding that university policies reflect their special interests. So there is no shortage of topics for student journalists to address. Of course, they also write about everything that young people are interested in – music, movies, computers, sports, travel and pop culture. Student newspapers are an important training group for democracy. They are also very interesting to read.

campus 1
the land and buildings of a university or college, including the buildings where students live
a beautiful campus in New England
on/off campus
Most first-year students live on campus.

directly relating to the subject or problem being discussed or considered
ￚopposite irrelevant
Relevant documents were presented in court.
We received all the relevant information.
relevant to
What experience do you have that is relevant to this position?

censor to examine books, films, letters etc to remove anything that is considered offensive, morally harmful, or politically dangerous etc
The information given to the press was carefully censored by the Ministry of Defence.

tear something ↔ down phrasal verb

to destroy a building deliberately
A lot of the old tower blocks have been torn down to make way for new housing.

American English tuition fees British English the money you pay for being taught
When I started college, tuition was $350 a quarter.