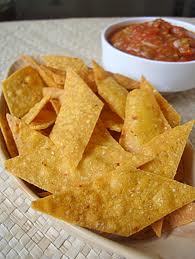 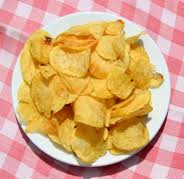 The story goes that the potato chip was invented in Saratoga Springs, N.Y. in 1853. Multi- millionaire Cornelius Vanderbilt complained to the chef that his fried potatoes were sliced too thickly. Chef George Crum responded by slicing the potatoes paper thin and frying them in hot oil. The potato chip became an instant success. Many companies have made large profits on chips. The most successful brands are associated with the Frito-Lay Company. Herman W. Lay of Nashville, Tennessee, was selling potato chips from the back of his car in the early 1930s.

He soon became a successful distributor for a brand of potato chips, which were made in Atlanta, Georgia. When that company ran into financial problems, Lay arranged to buy them out. It now became H. W. Lay and Company. Meanwhile in Texas, Elmer Doolin was trying to sell chips made from corn dough. This was an old Mexican recipe, which Doolin had found in San Antonio, Texas. At first, these Fritos corn chips were made in Mr.

Doolin’s mother’s kitchen. It took a few years before they sold very well. Mr. Doolin moved the company to Dallas and began to expand his market. In 1945, he granted the H. W. Lay Co. the rights to make Fritos corn chip for the American southeast. In 1961, the two companies merged to become Frito-Lay Inc. In 1965, Frito-Lay merged with Pepsi to become PepsiCo. Inc., one of the largest snack food and beverage companies in the world. In 2000, Frito-Lay sold 58% of all the snack chips in the U.S.A. In Canada and the United States, Frito-Lay products had sales of $9.9 billion.

The most popular brand was Lay’s potato chips, followed by Doritos, Ruffles, Tostitos, Cheetos, and Fritos. Internationally, Frito-Lay has 28% of the market worldwide. That amounts to $5.9 billion annually. Why are potato chips and corn chips so popular? Well, they are versatile. You can eat them by themselves or with a sandwich for lunch. They can replace other forms of potatoes and corn. They can also come in various flavours. For example, potato chip flavours include ketchup, salt and vinegar, barbeque, dill pickle and cheddar.

Potato chips can be thick or thin, ridged or flat, spicy or bland. Chips can be made from many things besides potatoes. There is corn dough and tortilla dough, of course. But chips can also be made from sweet potatoes, parsnips, taro root, peppers and other vegetables. One caution about potato chips is that they are not a good source of nutrition. Parents who send their children to school with a bag of potato chips for lunch need to remember that these are just a snack. Because snack chips usually contain a lot of fat, they can also lead to weight gain.

It is better not to eat snack chips too often, and not to eat them instead of healthier foods. In Canada nearly $2 billion is spent on snack food every year and half of this is spent on chips. People are always looking for new flavours to try. Spicy chips are gaining in popularity. The snack chip industry just keeps on growing.

Thinly slice the cucumbers.
Slice up the onions and add them to the meat.
sliced ham
—
distributor
a company or person that supplies shops and companies with goods
—
buy out phrasal verb

buy somebody/something ↔ out
to buy someone’s share of a business or property that you previously owned together, so that you have complete control
ￚsee also buyout

—
dough
a mixture of flour and water ready to be baked into bread, pastry etc
—
recipe

1
[intransitive and transitive] to combine, or to join things together to form one thing
merge with
The bank announced that it was to merge with another of the high street banks.
The company plans to merge its subsidiaries in the US.
merge something into something
proposals to merge the three existing health authorities into one
merge together
The villages have grown and merged together over the years.

The country’s Parliament (Majlis) to merge five ministries into two new ones.

2
[intransitive] if two things merge, or if one thing merges into another, you cannot clearly see them, hear them etc as separate things
merge into
She avoided reporters at the airport by merging into the crowds.
merge with
Memories seemed to merge with reality.

having many different uses
The potato is an extremely versatile vegetable.

food that is bland has very little taste
a bland diet

Nutrition and exercise are essential to fitness and health.
a nutrition expert poor/good nutrition
Poor nutrition can cause heart disease in later life.

▶INCREASE◀
an increase in the amount or level of something
ￚopposite loss
gain in
a gain in weekly output
gain of
Retail sales showed a gain of 0.4%.
The Democratic Party needed a net gain of only 20 votes.
Eating too many fatty goods could cause weight gain .