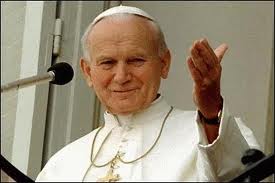 Our Lady of Jasna Gora is the teacher of true love for all. And this is particularly important for you, dear young people. In you, in fact, is decided that form of love which all of your life will have and, through you, human life on Polish soil: the matrimonial, family, social and national form – but also the priestly, religious and missionary one. Every life is determined and evaluated by the interior form of love. Tell me what you love, and I will tell you who you are. I watch! How beautiful it is that this word is found in the call of Jasna Gora. It possesses a profound evangelical ancestry: Christ says many times: ‘Watch’ (Matt. 26: 41). Perhaps also from the Gospel it passed into the tradition of scouring. In the call of Jasna Gora it is the essential element of the reply that we wish to give to the love by which we are surrounded in the sign of the Sacred Icon. The response to this love must be precisely the fact that I watch! What does it mean, ‘I watch’? It means that I make an effort to be a person with a conscience. I do not stifle, this conscience and I do not deform it; I call good and evil by name, and I do not blur them; I develop in myself what is good, and I seek to correct what is evil, by overcoming it in myself. This is a fundamental problem which can never be minimized or put on a secondary level. No! It is everywhere and always a matter of the first importance. Its importance is all the greater in proportion to the increase of circumstances which seem to favour our tolerance of evil and the fact that we easily excuse ourselves from this, especially if adults do so. My dear friends! It is up to you to put up a firm barrier against immorality, a barrier – I say – to those social vices which I will not here call by name but which you yourselves are perfectly aware of. You must demand this of yourselves, even if others do not demand it of you. Historical experiences tell us how much the immorality of certain periods cost the whole nation. Today when we are fighting for the future form of our social life, remember that this form depends on what people will be like. Therefore: watch! Christ said to the apostles, during his prayer in Gethsemane: ‘Watch and pray that you may not enter into temptation’ (Matt.26: 41) ‘I watch’ also means: I see another. I do not close in on myself, in a narrow search for my own interests, my own judgements. ‘I watch’ means: love of neighbour; it means: fundamental interhuman solidarity. Before the Mother of Jasna Gora I wish to give thanks for all the proofs of this solidarity which have been given by my compatriots, including Polish youth, in the difficult period of not many months ago. It would be difficult for me to enumerate here all the forms of this solicitude which surrounded those who were interned, imprisoned, dismissed from work, and also their families. You know this better than I. I received only sporadic news about it.

priestly
adjective
like a priest, or relating to a priest :
priestly robes

missionary adjective
relating to the work of missionaries :

evangelical
adjective
evangelical Christians believe that they should persuade as many people as possible to become Christians :

scour verb
to search very carefully and thoroughly through an area, a document etc
scour something for something
Her family began to scour the countryside for a suitable house.

stifle verb
1 [ transitive ]   to stop something from happening or developing  OPP  encourage :

rules and regulations that stifle innovation
How can this party stifle debate on such a crucial issue?

2 [ transitive ]   to stop a feeling from being expressed :

He  stifled  an  urge  to hit her.
stifle a yawn/smile/grin etc
I tried to stifle my laughter.

blur noun
a shape that you cannot see clearly

blur of
I saw the blur of the car as it passed in front of me.
The island was a blur through misty rain.

barrier between
The mountains form a  natural barrier  between the two countries.

the fight against vice on the streets
The police have smashed a vice ring   (= a group of criminals involved in vice )  in Chicago.  →   vice squad

solidarity noun
loyalty and general agreement between all the people in a group, or between different groups, because they all have a shared aim :

a gesture of solidarity
an appeal for worker solidarity
show/express/demonstrate your solidarity (with somebody)
I come before you today to express my solidarity with the people of New York.

compatriot noun
someone who was born in or is a citizen of the same country as someone else  SYN  countryman
sb’s compatriot
Schmidt defeated his compatriot Hausmann in the quarter final.

enumerate verb
to name a list of things one by one

solicitude noun
care and concern for someone’s health, safety etc :
She was grateful to him for his solicitude.

SYN intermittent :
There has been sporadic violence downtown.