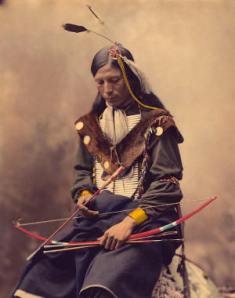 The best known picture of an American Indian is a warrior in buckskin, riding a horse, wearing a headdress of eagle feathers and carrying a spear, or bow and arrow. This is a picture of a Plains Indian, and it appears in many Hollywood westerns and on the American five-cent piece. There were many tribes of Plains Indians; for the Northern American prairies or plains stretch from the northern forest of western Canada down to the States of Oklahoma and Texas in southern U.S.A.

It is interesting that our image of the Plains Indian is only true for the last couple hundred years. It was not until the 1600s that Plains Indians began to ride horses. There were no horses in America until Spanish soldiers brought them in the 1500s and 1600s. Some of these horses escaped and ran wild on the prairies of America. It was these wild horses that the Plains Indians learned to tame.

Before they had horses, the Indians hunted buffalo on foot. Buffalo were huge bison, or wild cattle, which traveled in very large herds. A big herd might have millions of buffalo. It was difficult to cross the prairie because these animals blocked your way.  The Plains Indians had various ways of killing buffalo. Before they had horses, Indian hunters would quietly creep up close to the herd; then they would fire their arrows together. There was always the danger that the herd would stampede and trample the hunters. Another method was to drive the buffalo over a steep cliff. There are a number of places on the plains where this was done.

Once the Plains Indians had horses, they preferred to hunt buffalo on horseback. When the tribes started to use guns, they could kill many buffalo. Artist Paul Kane describes a buffalo hunt in the Red River Valley in 1846. The hunters carried their bullets in their mouths so that they could shoot faster. They would ride right into the herd, shooting at close quarters. They would drop an article of clothes on the slain buffalo to mark it for themselves. Then they wouldcontinue the hunt. After the hunt, the Indians would skin the animals, and the women would dry the meat and store it in fat. A single hunt might kill more than 30,000 buffalo.

The Plains Indians received nearly everything they needed from the buffalo. Of course, they used buffalo meat for food. They also used the buffalo skins for clothing, blankets, and the covering of their teepees. These teepees were cone-shaped tents, which were easy to put up and take down. Plains Indians were nomadic, and followed the animals they hunted. Since these animals were plentiful, Plains Indians usually led a comfortable life. They developed complex religions and social rituals, as well as specialized societies or clubs. There were also rituals and customs for hunting and warfare.  Many Plains Indians fought hard against the settlement of the Great Plains. The American government discouraged the hunting of buffalo, because without the buffalo the Plains Indians would not be able to fight. With the buffalo disappearing, the Plains Indians had to give up fighting and move into government-sponsored reservations.

fml or lit a soldier or experienced fighting man, esp. in former times:
a noble warrior
a Zulu warrior

▶ANIMAL◀
plural buck
or bucks
a male rabbit, deer, and some other male animals

something that someone wears on their head, especially for decoration on a special occasion
The bride wore white with a pearl headdress. 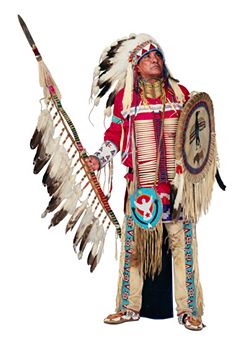 a pole with a sharp pointed blade at one end, used as a weapon in the past

to move in a quiet, careful way, especially to avoid attracting attention
creep into/over/around etc
Johann would creep into the gallery to listen to the singers.
He crept back up the stairs, trying to avoid the ones that creaked.

to step heavily with the feet (on); crush under the feet:
The hunter was trampled to death by a wild elephant.
You can’t just trample on her feelings like that.