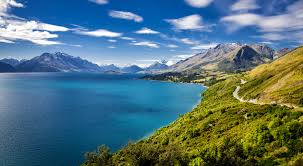 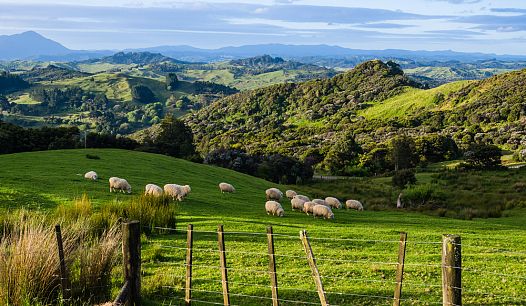 New Zealand is a country that is located in the South Pacific ocean. The country is made up of two large islands, the North Island and the South Island, which are separated by a narrow channel of water. Although New Zealand has many beautiful mountains and forests, much of the land is used for farming. In fact, New Zealand has almost 70 million sheep, but only four million people! New Zealand’s farms are also famous for their delicious fruit, especially apples and kiwi fruit.

During the 19th century, some wars started between the Maori and the British settlers. After years of fighting, the two sides signed a treaty to end the wars. Today the Maori have achieved equal rights, but there are still some disagreements about land ownership. In recent years, many more people have come to New Zealand, mostly from Asian countries and from other Pacific Islands.

There are three large cities in New Zealand. Auckland is the largest city, with more than one million people. It is located in the northern part of the North Island. The capital city of New Zealand is Wellington. It is located in the southern part of the North Island. The largest city of the South Island is Christchurch. The cities of New Zealand are very modern and clean. Many tourists enjoy visiting the cities of New Zealand, but they also enjoy the beautiful countryside. New Zealand is an excellent place for outdoor recreation, such as climbing or walking.

Most of New Zealand has a mild, or temperate, climate. The summer is not very hot, and the winter is not very cold. Because New Zealand is in the southern part of the world, summer begins in December and winter begins in June. The South Island is cooler than the North Island, but both islands have similar amounts of rain. This rain gives the fields and forests of New Zealand a beautiful green colour. Each year, many tourists visit New Zealand, to experience the beautiful countryside and the interesting cultures of its people.

ethnic
relating to a particular race, nation, or tribe and their customs and traditions
The school teaches pupils from different ethnic groups ethnic violence/divisions/strife etc (=violence etc between people from different races or cultures)
ethnic background/origin
The students are from a variety of ethnic backgrounds.
plans to partition the republic along ethnic lines (=in a way that keeps different ethnic groups apart)

a formal written agreement between two or more countries or governments
Both sides have agreed to sign the treaty .
The peace treaty ends nearly four years of violence.

an activity that you do for pleasure or amusement
ￚsee also hobby, pastime, leisure
His only recreations are drinking beer and watching football.
the provision of recreation facilities (=places or equipment for people to use to enjoy themselves) recreation ground/area/room a recreation
area for children to play in