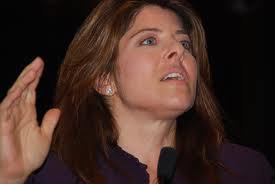 When I wrote a book that caused controversy, I saw how big a dragon was this paralysis by niceness. “The Beauty Myth” argues that newly rigid ideals of beauty are instruments of a backlash against feminism, designed to lower women’s self-esteem for a political purpose. Many positive changes followed the debate. But all that would dwindle away when someone yelled at me — as, for instance, cosmetic surgeons did on TV, when I raised questions about silicone implants. Oh, no, I’d quail, people are mad at me! Then I read something by the poet Audre Lorde. She’d been diagnosed with breast cancer. “I was going to die,” she wrote, “sooner or later, whether or not I had even spoken myself. My silences had not protected me. Your silences will not protect you…. What are the words you do not yet have? What are the tyrannies you swallow day by day and attempt to make your own, until you will sicken and die of them, still in silence? We have been socialized to respect fear more than our own need for language.” I began to ask each time: “What’s the worst that could happen to me if I tell this truth?” Unlike women in other countries, our breaking silence is unlikely to have us jailed, “disappeared” or run off the road at night. Our speaking out will irritate some people, get us called bitchy or hypersensitive and disrupt some dinner parties. And then our speaking out will permit other women to speak, until laws are changed and lives are saved and the world is altered forever. Next time, ask: What’s the worst that will happen? Then push yourself a little further than you dare. Once you start to speak, people will yell at you. They will interrupt you, put you down and suggest it’s personal. And the world won’t end. And the speaking will get easier and easier. And you will find you have fallen in love with your own vision, which you may never have realized you had. And you will lose some friends and lovers, and realize you don’t miss them. And new ones will find you and cherish you. And you will still flirt and paint your nails, dress up and party, because, as I think Emma Goldman said, “If I can’t dance, I don’t want to be part of your revolution.” And at last you’ll know with surpassing certainty that only one thing is more frightening than speaking your truth. And that is not speaking.