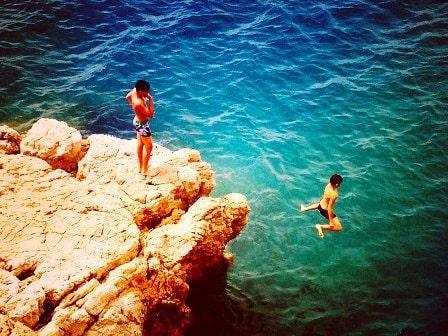 I am afraid of water.

I don’t know why I am afraid.

I have never had a bad experience in the water.

I just never learned to swim.

I should have done that when I was just little.

It would be easier for me to swim now if I had started when I was young.

I will go into the shallow water, but I start to panic when the water gets higher than my chest.

I don’t like the feeling of not being able to put my feet on the bottom of the pool or the lake.

I don’t like to get water up my nose.

I choke and cough when that happens.

My friends just tell me to relax and I will float, but I find it hard to relax in deep water.

They keep telling me that if I panic I will sink.

Most of my friends have had swimming lessons.

Some of them are even lifeguards.

They have tried to teach me to swim, but I think I need to go to a place where they actually teach swimming.

It would be so nice to jump into a pool of cold water on a hot summer day.

That would be so refreshing.

If I go out onto a boat, I always wear a life jacket.

I think it is wise to do that.

Everyone should wear a life jacket on a boat.

I would rather be safe than sorry.

I have decided that I will overcome my fear.

I will go and take swimming lessons.

I have a goal.

By this time next year, I would like to be able to swim the length of the pool without being afraid.

It is best to face your fears and deal with them.

I hope that I can overcome my fear of water.

to (cause to) have great difficulty in breathing or stop
breathing because of blocking of or damage to the breathing
passages.
to be unable to breathe properly because something is in your
throat or there is not enough air.
synonym: gag
-He almost choked to death on a fish bone.
-She choked with laughter/fury.
-plants choked by weeds.
choke on
-He choked on a piece of bread.
-Six people choked to death on the fumes.
-Willie choked on a mouthful of tea. 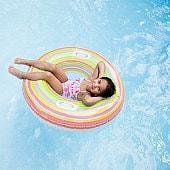 to suddenly feel so frightened that you cannot think clearly or behave sensibly, or to make someone do this, an overwhelming feeling of fear and anxiety
-He started to panic when he saw the gun.
-Don’t panic! We’ll soon get you out of there.
panic somebody into doing something
-The protests became more violent and many people were panicked into leaving the country.
-Don’t panic!
-The crowd panicked at the sound of the explosion.
-The thunder panicked the horses.
-a crisis that panicked the government into taking rash measures.

to fight successfully (against); defeat:
-to overcome the enemy/one’s fear/difficulties.
-He struggled to overcome his shyness.