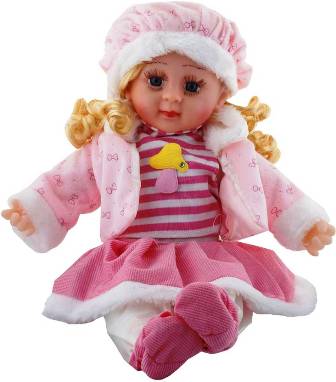 When I was an infant, I got a rag doll.
It was a very plain, little doll, and it wore a clown outfit and a clown’s hat.
I used to take that doll to bed with me every night.
I couldn’t go to bed without my doll.
My mother used to pretend that the doll was talking to me.
She would make the doll dance and sing songs.
I would talk to the doll.
My mother would answer for the doll, but I was a baby, and I thought that the doll was
actually talking to me.
That doll was my best friend.
I took her everywhere.
One time I took her to a store with me, and I left her on a shelf in the store.
We were halfway home when I realized that I didn’t have my doll with me.
I was very upset.
My mother and I rushed back to the store.
My doll was still there.
I was so relieved.
I hugged my doll, and I promised myself that I would never leave her anywhere again.
I couldn’t imagine life without that doll.
Through the years, the doll became less important in my life.
I had other things to do, but the doll still sat on my bed during the day, and I still took it to bed at night.
I gave that doll a lot of love when I was little.
In fact, I loved the doll so much that she looks tattered and torn now.
There are parts of her face and hands that are almost worn away.
I had a lot of other toys when I was little, but none of them were ever so important as that doll.
I don’t play with toys anymore, but that doll is still in my room.
She sits in a special chair in the corner.
I’ll always have that doll.
No matter how worn out she is, I’ll always keep her and cherish her as a part of my early childhood.

a soft doll made of cloth

halfway:
at a middle point in space or time between two things
ￚsynonym partway

halfway through/up/down/between etc
*He chased Kevin halfway up the stairs.

*It was a terrible film – I left halfway through.

*They’ve just reached the halfway stage of the project.

relieved (adj):
feeling happy because you are no longer worried about something
greatly/immensely/extremely etc relieved
*She looked immensely relieved when she heard the news.
relieved to see/hear/know something

*His mother was relieved to see him happy again.
relieved (that)
*I felt relieved that Ben would be there.
*A relieved smile spread over his face.

used after verbs, nouns, and adjectives to introduce a clause which shows what someone says or thinks, or states a fact or reason
*If she said that she’d come, she’ll come.

*I can’t believe that he’s only 17.
*Are you sure that they live in Park Lane?
*allegations that he is guilty of war crimes
*The fact that he is your brother-in-law should not affect your decision.
*He might have left the money for the simple reason that he didn’t know it was there.

phrasal verb
to gradually become thinner or smoother, or to make something become like this, because of rubbing or touching
*The leather is starting to wear away at the seams.
wear something ↔ away
*Most of the grass had already been worn away by the spectators.

*In the course of centuries, the wind has worn away the rock.

1
if you cherish something, it is very important to you
*He was a man who cherished his privacy.

*I still cherish the memory of that day.
cherish a hope/an idea/a dream etc
*a willingness to re-examine cherished beliefs

to love someone or something very much and take care of them well
*In marriage, a man promises to cherish his wife.

2 to keep (hope, love, or other deep feelings) firmly in mind:

*I cherish the hope that he will come back.
*cherished memories