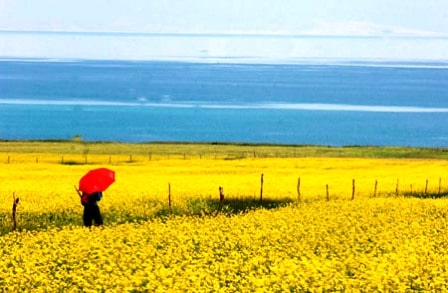 I have never been to British Columbia, but I hear that it is very beautiful.
Nova Scotia is on the Atlantic Ocean, so there are many fishermen out there.
The people in the provinces are even different from each other.
In Quebec, many of the people speak French.

In the Maritime Provinces, the people like to play their own kind of music.
They play fiddles and accordions, and many of them dance very well.
Nunavut is in the north, so life is quite different there.
The people who live in the new territory of Nunavut are very close to wildlife.
They do a lot of hunting and fishing.

It can get very cold up in the Arctic where Nunavut is.
I live in Ontario.
Even within Ontario life can be quite different.
The capital of Ontario is Toronto.
Toronto is a very busy city with lots of apartments, offices and shops.
Toronto is an exciting place, and it has a lot to offer.
There are theatres and restaurants to suit every taste.

The culture in Toronto is very diverse.
If you drive a few miles north of Toronto, you will find places that are tranquil and peaceful.
Many people leave Toronto on the weekends and drive to their cottages where they find rest and relaxation.
Canada is made up of many different cultures.

People of many different ethnic backgrounds live in harmony in Canada.
That is why I like Canada.
In Canada we celebrate our differences.

relating to a particular race, nation, or tribe and their customs and traditions
*The school teaches pupils from different ethnic groups .
*ethnic Russians in Estonia ethnic violence/divisions/strife etc (=violence etc between people from different races or cultures)
ethnic background/origin
*The students are from a variety of ethnic backgrounds.
*plans to partition the republic along ethnic lines (=in a way that keeps different ethnic groups apart)

check its American pronunciation in a dictionary

British English [countable]
a musical instrument like a large box that you hold in both hands. You play it by pressing the sides together and pulling them out again, while you push buttons and keys.

someone who catches fish as a sport or as a job

*the US territory of Guam