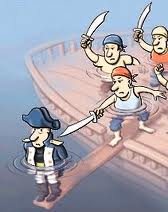 Mutiny is a word that has brought fear to the most powerful empires in the world. Mutiny is when soldiers and sailors refuse to obey their commanders, often killing or imprisoning them. Mutiny can spread through whole armies and navies, throwing governments into crisis. No wonder that nations have always taken harsh measures to punish mutinous leaders. The ancient Romans executed every tenth man from an army unit that had mutinied. In the British navy, mutineers were normally hanged. However, one of history’s most famous mutinies did not happen to a whole army or navy, it happened on a single small ship, H.M.S. Bounty. H.M.S. Bounty set sail from England in December 1787. It was a small cramped vessel, uncomfortable during a long voyage. Its goal was to sail to the South Pacific and bring back Tahitian breadfruit plants. The government hoped that breadfruit would provide a cheap food for black slaves in the British West Indies. The captain of the Bounty was William Bligh, a veteran of many voyages. His crew, however, was largely made up of inexperienced young men. There was no room on the ship for soldiers or marines, so Bligh, as the only commissioned officer, had the difficult task of maintaining order. After a long and difficult trip, the Bounty finally arrived in Tahiti in October 1788. Free from the constraints of life aboard ship, the young men enjoyed life on the tropical island with the friendly natives. Many of the sailors established relationships with island women. Meanwhile, the collection of breadfruit plants for the homeward voyage continued. In April 1789, Captain Bligh decided that it was time to return to England. The breadfruit plants were loaded on the deck, making the ship cramped indeed. The Bounty set sail and would no doubt have reached England again, except for the turmoil in the mind of one of its young officers. Fletcher Christian was 24 years old, of dark complexion, and from a good family. As the Bounty pulled further from Tahiti, Fletcher seemed to have decided that he didn’t want to return to England. Tahiti had been an earthly paradise, and now long months of discomfort aboard ship awaited him. He was too far from Tahiti to return by himself. He would need the Bounty. On April 28, 1789, some of Fletcher Christian’s friends seized control of the ship. Captain Bligh and eighteen sailors who supported him were put in a small open boat with limited food and water. Meanwhile, Christian and his 24 followers sailed back to Tahiti. Eventually, Fletcher Christian would sail the Bounty to the uninhabited Pitcairn Islands, far to the south of the shipping lanes. Meanwhile, Bligh and his loyal followers sailed in their open boat almost the width of the Pacific Ocean. They suffered from thirst, hunger and sickness, as well as hostile natives. Finally, they reached Timor in Indonesia in June and eventually made their way to the capital, Batavia. When they returned to England, Captain Bligh was first greeted as a hero. Soon, however, public attitudes changed. The legend began that Bligh was a cruel tyrant who had caused the mutiny by harsh treatment of his men. Although Bligh had a temper, and was not very tactful, this does not appear to be the whole story. In fact, it is the controversy over who is to blame for the mutiny – Bligh or Christian – that has kept the story alive for more than 200 years. 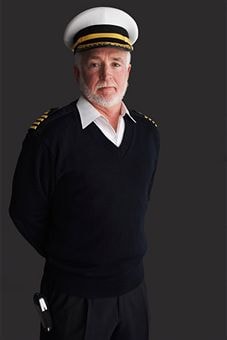 Source 1
An officer in the armed forces who has a higher rank, such as a captain or a general

Source 2
A military officer who has a commission 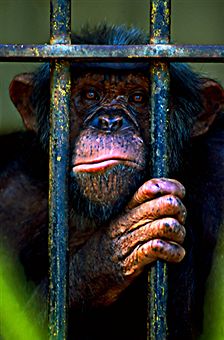 Source 1
A thing that limits or restricts something, or your freedom to do something
Synonym: restriction
Constraints of time/money/spaceFinancial/economic/legal/political constraintsConstraint on something This decision will impose serious constraints on all schools.

Source 2
[Countable] something that limits your freedom to do what you want [= restriction]
Constraint on Constraints on spending have forced the company to rethink its plans.
The constraints of family life
Financial/environmental/political etc constraints There have been financial and political constraints on development.
Impose/place constraints on somebody/something
Constraints imposed on teachers by large class sizes

Source 3
1 a: the act of constraining
b: the state of being checked, restricted, or compelled to avoid or perform some action
The constraint and monotony of a monastic life — Matthew Arnold
c: a constraining condition, agency, or force : check
Put legal constraints on the board’s activitie

2 a: repression of one’s own feelings, behavior, or actions
b: a sense of being constrained : embarrassment 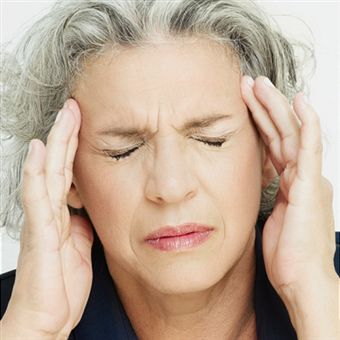 Source 1
A state of great anxiety and confusion
Synonym: confusion
Emotional/mental/political turmoilHis statement threw the court into turmoil.
Her mind was in (a) turmoil.
She felt much calmer after the turmoil of recent weeks.
The prospect of another week of political turmoil
Ashley gazed at him, her thoughts in turmoil.

Source 2
A state or condition of extreme confusion, agitation, or commotion

Examples of turmoilThe country has been in turmoil for the past 10 years.
A period of political turmoil
His life has been in a constant turmoil.
Synonyms: disquiet, restiveness, restlessness, unrest, uneasiness, uniqueness
Antonyms: calm, ease, peace, peacefulness, quiet, tranquility 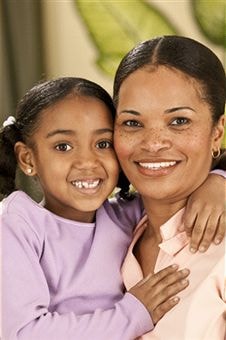 2 the general character of something
A move which changed the political complexion of the country
Drinking water is good for the complexion.
She was fair-complexioned with blonde hair.

Source 2
1: the combination of the hot, cold, moist, and dry qualities held in medieval physiology to determine the quality of a body

2a: an individual complex of ways of thinking or feeling
b: a complex of attitudes and inclinations

3: the hue or appearance of the skin and especially of the face
A dark complexion

4: overall aspect or character
By changing the complexion of the legislative branch — Trevor Armbrister

She has a dark complexion.
All of the children had healthy complexions.
The complexion of the neighborhood has changed over the years.
Synonyms: color, coloring
Tactful 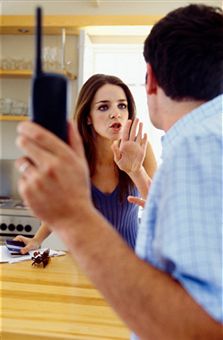 Source 1
Careful not to say or do anything that will annoy or upset other people
Synonym: diplomatic
That wasn’t a very tactful thing to say!
I tried to find a tactful way of telling her the truth.
It might be more tactful if you didn’t come to the wedding.
Antonym: tactless

Source 2
Not likely to upset or embarrass other people [≠ tactless]:
There was no tactful way of phrasing what he wanted to say.
A tactful man

Source 3
Examples of tactfulHe gave a tactful critique of her story.
It was tactful of her not to criticize me in front of my boss.
Synonyms: diplomatic, politic
Antonyms: impolitic, tactless, undiplomatic, and untactful 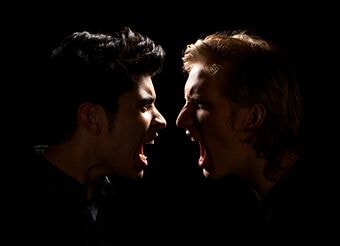 Source 1
Controversy (over/about/surrounding somebody/something) public discussion and argument about something that many people strongly disagree about, disapprove of, or are shocked by
To arouse/cause controversyA bitter controversy over/about the site of the new airport
The controversy surrounding his latest movie
The President resigned amid considerable controversy.

The decision aroused much controversy among the students.
The new movie is a subject of controversy.
There is controversy surrounding the team’s decision to trade the star pitcher.
The controversy is over whether he should be fired or not.
A controversy arose over the new law.
Synonyms: altercation, battle royal, brawl, contretemps, argument, cross fire, disagreement, dispute, donnybrook, falling-out, fight, hassle, imbroglio, kick up, misunderstanding, quarrel, rhubarb, row, scrap, set-to, spat, squabble, tiff, wrangle
Antonyms: accord, agreement, consensus, harmony, unanimity