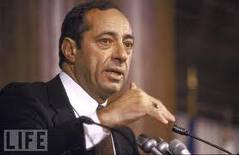 I learned about our kind of democracy from my father. I learned about our obligation to each other from him and from my mother. They asked only for a chance to work and to make the world better for their children and to be protected in those moments when they would not be able to protect themselves. This nation and its government did that for them. And that they were able to build a family and live in dignity and see one of their children go from behind their little grocery store on the other side of the tracks in South Jamaica where he was born, to occupy the highest seat in the greatest state of the greatest nation in the only world we know, is an ineffably beautiful tribute to the Democratic process.

A government strong enough to use the words ‘love’ and ‘compassion’ and smart enough to convert our noblest aspirations into practical realities. We believe in encouraging the talented, but we believe that while survival of the fittest may be a good working description of the process of evolution, a government of humans should elevate itself to a higher order, one which fills the gaps left by a chance or a wisdom we don’t understand. We would rather have laws written by the patron of this great city, the man called the ‘world’s most sincere democrat’ – St Francis of Assisi – than laws written by Darwin.

We believe, as Democrats, that a society as blessed as ours, the most affluent democracy in the world’s history, that can spend trillions on instruments of destruction, ought to be able to help the middle class in its struggle, ought to be able to find work for all who can do it, room at the table, shelter for the homeless, care for the elderly and infirm, hope for the destitute. We proclaim as loudly as we can the utter insanity of nuclear proliferation and the need for a nuclear freeze, if only to affirm the simple truth that peace is better than war because life is better than death.