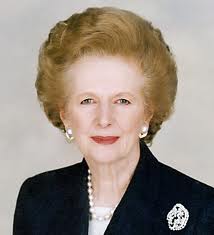 Some of the founding fathers of the Community thought that the United States of America might be its model. But the whole history of America is quite different from Europe. People went there to get away from the intolerance and constraints of life in Europe. They sought liberty and opportunity; and their strong sense of purpose has, over two centuries, helped create a new unity and pride in being American – just as our pride lies in being British or Belgian or Dutch or German. I am the first to say that on many great issues the countries of Europe should try to speak with a single voice.

I want to see us work more closely on the things we can do better together than alone. Europe is stronger when we do so, whether it be in trade, in defence, or in our relations with the rest of the world. But working more closely together does not require power to be centralized in Brussels or decisions to be taken by an appointed bureaucracy. Indeed, it is ironic that just when those countries such as the Soviet Union, which have tried to run everything from the centre, are learning that success depends on dispersing power and decisions away from the centre, some in the Community seem to want to move in the opposite direction. We have not successfully rolled back the frontiers of the State in Britain only to see them reimposed at a European level, with a European super-State exercising a new dominance from Brussels.

Certainly we want to see Europe more united and with a greater sense of common purpose. But it must be in a way which preserves the different traditions, parliamentary powers and sense of national pride in one’s own country; for these have been the source of Europe’s vitality through the centuries.