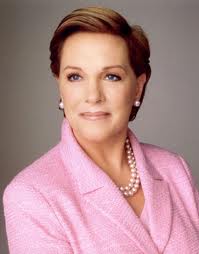 Julie Andrews, born Julia Elizabeth Wells, was born on October 1, 1935. She lived in a small town called Walton-on-the-Thames in England, which is south of London. Her father Ted Wells was a teacher, and mother Barbara was a pianist and piano teacher. She also played piano for her sister’s dancing school. Julie learned ballet and tap as a toddler from her Aunt Joan Morris. By the time Julie was three, she could read and write. When Julie was four, her parents divorced, and Barbara married Ted Andrews (a performer during the war and an excellent tenor).

He soon began giving Julie singing lessons. At seven years of age, Julie had an unbelievable range of four octaves. She soon changed her last name to “Andrews,” the last name of her stepfather. As she grew older, Julie became one of England’s most popular performers. In early childhood, Julie loved to play with her two younger half-brothers, but soon went on to stardom. At age twelve, Julie was cast in a London play and stopped the show with her remarkable talent.

She starred in many different BBC productions during the forties. Later, she starred in many Broadway plays such as The Boyfriend, My Fair Lady, and Camelot. It was the latter play that Walt Disney made a special trip to New York to see, and he decided then and there that Julie was perfect for the role of Mary Poppins in the film of the same name. Mary Poppins was the high-spirited, magical nanny of Jane and Michael Banks, two small British children. Julie also starred in many other films, such as The Americanization of Emily, Hawaii, Thoroughly Modern Millie, and my personal favourite, The Sound of Music.

In this production she plays Maria, the lively governess of Austrian Naval Captain Georg von Trapp’s seven children: Liesl, Fredric, Louisa, Kurt, Brigitta, Marta and Gretl. Another of Julie’s talents is writing. Two of her best-known books are The Last of the Really Great Whangdoodles, and Mandy. Julie also has five children. A daughter, Emma Kate Walton, from her marriage to Tony Walton; four children from her second marriage to Blake Edwards, two of whom were from Blake’s previous marriage, Jennifer and Geoffrey; and two who were adopted from Vietnam, Amy and Joanna.

In 1998, tragedy struck Julie. She lost her extraordinary talent for singing due to surgery on her throat in order to remove a benign tumor. A year later, she made an attempt to sing again; however, her voice will never be the same. Julie has recently been on Britain’s Royal Honour List and is now a Dame.

a very young child who is just learning to walk

—
tenor
a male singing voice that can reach the range of notes below the lowest woman’s voice, or a man with a voice like this
—
octave

the state of being a famous performer
ￚsee also famehis rapid rise to stardom shoot/rise/zoom to stardom (=become famous very quickly)
Ellen shot to stardom as a model last year.

▶ACTORS◀
all the people who perform in a play, film etc
cast of
Films like ‘Ben Hur’ have a cast of thousands. the entire cast of ‘Les Miserables’
an all-star cast a strong supporting cast (=everyone except the main actors) a member of the cast

a woman whose job is to take care of the children in a family, usually in the family’s own home
She found a job as a nanny with a wealthy Italian family.

____governess
a female teacher in the past, who lived with a rich family and taught their children at home
—
strike

▶SOMETHING BAD HAPPENS◀
[intransitive and transitive] if something bad strikes, it suddenly happens or suddenly begins to affect someone
The plague struck again for the third time that century. Everything seemed to be going fine when suddenly disaster struck .