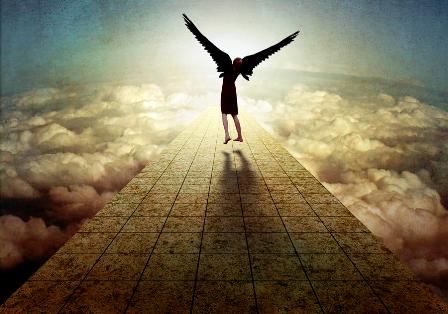 If I Could Fly

I sometimes imagine what it would be like if I could fly like a bird.
Just imagine what it would be like to soar into the sky, flying high above the trees.
You could stand on high rooftops and never be afraid of falling.
You would see so many things as you flew over rooftops and forests.
You would feel incredibly free as you traveled from place to place, not bothered by road signs or traffic jams.
If I could fly like a bird, I would start from my back yard and travel through town.
I would look down on the houses and factories.
When I got tired, I would land in a field and take a nap.
I would travel above rivers, and follow them as they wound along and emptied into lakes and oceans
I would fly above parks, and I would call out to the children as I flew high above them.
I would dip and dive as I flew.
I would soar up high and dive down low so that I could almost touch the treetops.
Have you ever flown?
I know that you can’t fly like a bird, but you might have taken an airplane ride.
When you’re in an airplane, you pass through clouds.
It is exciting to take an airplane ride.
I love taking airplane flights.
I like to look down at the Earth.
When you are up that high, everything below you looks tiny.
That’s the closest I’ll get to flying like a bird.
But I can still use my imagination and spread my wings and soar high above the world just like a bird.

soar
to fly
– The eagles soared high above the valleys.
– She watched the dove soar above the chestnut trees.
– the bird spread its wings and soared into the air.

traffic jam
a long line of vehicles on a road that cannot move or can only move very slowly
-We were stuck in a traffic jam for two hours.
——————————————–

past tense and past participle of wind

if a road, river etc winds somewhere, it has many smooth bends and is usually very long
wind (its way) through/along etc something
– Highway 99 winds its way along the coast.
– a winding path

REFER TO DICTIONARY TOO

to say something loudly
call something ↔ out
– ‘Hi there!’ I called out.
call out to
– The firemen called out to him.

▶MOVE DOWN◀
[intransitive and transitive] to move down, or to make something move down, usually for just a short time
We watched the sun dip below the horizon. She dipped her head and spoke into the microphone.

the branches at the top of a tree