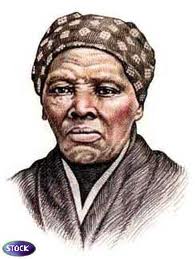 Before the American Civil War, the economy of the Southern States was based on the use of slave labour. The social and political leaders of the Old South were the plantation owners. Many of these owned hundreds of black slaves. The slaves were mainly used to pick crops like cotton and tobacco. Harriet Tubman was born in 1820 in the State of Maryland. As a girl of seven, she was sent into the fields to work with the adult slaves. The slaves worked from sunrise to sunset picking the crops. Often they sang songs while they worked.

Slaves were not taught to read or write. It was feared that reading and writing would help slaves to escape the plantations. Harriet Tubman was illiterate. Later in life, when she was in danger of being captured, she picked up a book and pretended to read it. This fooled the bounty hunters. When she was 15, Harriet helped another slave to escape. The overseer was so angry with her that he hit her over the head with an iron weight. Harriet was knocked unconscious for many days. All the rest of her life she suffered from headaches and sudden sleeping spells.

Harriet escaped from the plantation to Philadelphia, Pennsylvania. Since Pennsylvania was not a slave state, Harriet was fairly safe there. She was able to return secretly to the plantation and bring the rest of her family to freedom. There were already people working to bring black slaves up from the South to freedom. These people, both white and black, used the language of the railroad. Escaped slaves were called passengers, safe houses were called stations, and the guides were called conductors. Harriet soon became a conductor in the Underground Railway. In 1850, the American government passed a second Fugitive Slave Act.

This put more pressure on Northern States to return escaped slaves to the South. Because of this, the Underground Railway went further north to Canada. In 1793, Upper Canada (Ontario) had passed a law, bringing a gradual stop to slavery. In 1834, slavery was abolished in the whole British Empire. A lot of escaped slaves had come to Canada before 1850, but now nearly all escaped slaves tried to go there.

Harriet Tubman rented a house in St. Catharines, Ontario. This provided a shelter for new arrivals. Harriet made about eleven trips from Canada to the U.S.A. during these years. In all, she brought back about 300 people. Escaped slaves had to travel by night and suffered hardships in bad weather.

They had to hide during the day wherever they could. Harriet did not allow any passengers to turn back. That might endanger the whole Underground Railway. When the slave owners heard about Harriet, they offered a reward for her capture. But no one caught her, or turned her in. When the Civil War broke out in 1861, she acted as a spy for the Northern States.

After the war, she married a black American soldier, Nelson Davis. In 1869, a book was written about Harriet Tubman. Black slaves knew Harriet as “Moses.” The Bible tells the store of how Moses led the people of Israel out of slavery in Egypt. He led them north to Palestine. In the same way, Harriet Tubman delivered many of her people from slavery and led them north to freedom.

plantation
a large area of land in a hot country, where crops such as tea, cotton, and sugar are grown
a rubber plantation

illiterate1
someone who is illiterate has not learned to read or write
2
badly written, in an uneducated way
It was an illiterate letter, full of mistakes.
3
economically/politically/scientifically etc illiterate
knowing very little about economics, politics etc

captur▶PERSON◀
to catch a person and keep them as a prisoner
Government troops have succeeded in capturing the rebel leader.

someone who is in charge of a project, group of workers etc, and who makes sure that the job is done properly
ￚsynonym supervisor

—
spell a usu. quickly-passing period of illness of the stated kind: a coughing spell | a dizzy spell
—
conductor

a person employed to collect payments from passengers on a public vehicle, esp. a train
the guard on a train

—
Fugitivetrying to avoid being caught by the police
—

There has been a gradual change in climate.
the gradual decline in manufacturing industry
Education is a gradual process.

(an example of) difficult conditions of life, such as lack of money, unemployment, etc.
an economic policy that caused great hardship for many people Many students are suffering severe financial hardship .
hardship of
the hardships of war

1 to or at whatever place, position, or situation: Wherever you go, I go too. | Sleep wherever you like. | Wherever possible (=whenever it is possible) the jobs are given to local people.
2 (shows surprise) where: Wherever did you get that idea?

to put someone or something in danger of being hurt, damaged, or destroyed
Smoking during pregnancy endangers your baby’s life .

if something unpleasant such as a fire, fight, or war breaks out, it starts to happen
I was still living in London when the war broke out.

Does everyone know what to do if a fire breaks out?
Fighting broke out between demonstrators and the police.
—
Moses
a leader of the Jewish people in ancient times. According to the story in the Bible, he brought the Israelites out of Egypt. They were able to escape from the Egyptians when God made the waters of the Red Sea move so that they could walk across. Moses received the Ten Commandments (=God’s laws) from God on Mount Sinai.