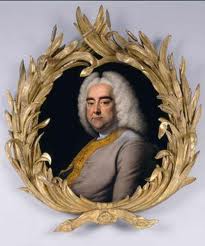 George Frederick Handel was a native of Germany and spoke with a German accent all his life. Most of that life, however, was spent in London, England. As a young musician, Handel’s sponsor was the Elector of Hanover. Later on, when the Elector became King George I of England, he continued to sponsor Handel.  The young Handel went to Italy to study opera. Opera had become a very fashionable entertainment for the upper classes. Handel traveled to England in 1711 and made an immediate success with his operas. Queen Anne granted him a royal pension for life in 1713. Because of this initial success, Handel tried to start a permanent opera company in London. But this failed and Handel lost money.

Since operas used full stage settings with costumes, scenery and props, they were expensive to produce. Handel decided to produce oratorios in which the parts were simply sung without actions.

On August 22, 1741, Handel began to work on his oratorio “The Messiah.” The text was made up of passages from the Bible relating to the birth, life and death of Jesus. Handel worked on it feverishly, missing meals and going without sleep. He finished it twenty-four days later. When he was asked how he felt on completing it, Handel said, “I thought I saw all Heaven before me, and the great God Himself.”

In the fall of 1741, Handel received an invitation from the Lord Lieutenant of Ireland to present operas and concerts there. Handel traveled from London to Dublin with his entire luggage and many of his singers. However, in order to rehearse on the way, he had to hire local people to fill in. Once, the composer soundly criticized one local singer who failed to meet his standards.

Handel was warmly received in Dublin, where his concerts were sold out. Even his rehearsals were considered newsworthy by the local papers. “The Messiah” was first publicly performed on April 13, 1742. Seven hundred people squeezed into a 600-seat theatre to hear it. A notice had requested that ladies attend in hoopless skirts, and that gentlemen come without their swords. A Dublin paper reported, “Words are wanting to express the exquisite delight it afforded to the admiring crowded audience.” All proceeds were donated to charity, as the church choirs had refused to participate except on those conditions.

Handel returned to London in August 1742 and prepared the oratorio for the London stage. “The Messiah” made its London debut on March 23, 1743, with King George II in the audience. It was during the Hallelujah Chorus that the King jumped to his feet and so initiated a tradition that has lasted ever since.  With such oratories, Handel was able to re-establish his popularity and restore his finances in London. “The Messiah” continued to be performed. After conducting it on April 6, 1759, the old composer collapsed and had to be carried home. He died eight days later.  “The Messiah” remains Handel’s most popular work, combining wonderful music with inspiring religious sentiments. The Biblical text speaks of hope and salvation, and the music allows the text to soar into angelic songs.

a small article, such as a weapon or piece of furniture, that is used on the stage in the acting of a play
Anna looks after costumes and props.
stage props

a long musical work with singing but without acting, usu.
telling a story from the Bible or about a religious subject

extremely active or excited:
They worked with feverish haste to finish the job.
ￚfeverishly adverb
Congress is working feverishly to pass the bill.

the cases, bags etc that you carry when you are travelling
American Equivalent: baggage

They searched his luggage for illegal drugs.
—
rehearse

to practice (a play, concert, marriage ceremony, etc.) in order to prepare for a public performance:
The actors were rehearsing (the play) until 2 o’clock in the morning.
I think we need to rehearse the first scene again.
rehearse for
The band was rehearsing for their world tour.

▶DO SOMEBODY’S JOB◀
to do someone’s job because they are not there
fill in for
I’m filling in for Joe for a few days.

formal accepted or considered to be correct by most people
received opinion/wisdom etc (=the opinion most people have)
The received wisdom is that he will retire within the next year.

important or interesting enough to be reported in newspapers, on the radio, or on television
newsworthy events

▶SMALL SPACE◀
to try to make something fit into a space that is too small, or to try to get into such a space
ￚsynonym squash
squeeze into
Five of us squeezed into the back seat.
squeeze through/past
He had squeezed through a gap in the fence.
squeeze somebody/something in
We could probably squeeze in a few more people.

—
hoopless
without a large ring made of wood, metal, plastic etc
—
wanting

fml not good enough or strong enough:
The invention was tested and found wanting.

a feeling of great pleasure and satisfaction
with/in delight
The kids were screaming with delight.
to somebody’s delight/to the delight of somebody
To the delight of his proud parents, he has made a full recovery.
squeal/gasp/cry etc of delight
She gave a little gasp of delight.

formal to provide something or allow something to happen
The room affords a beautiful view over the city. afford (somebody) an opportunity/chance
It afforded her the opportunity to improve her tennis skills.
The new law will afford protection to employees.

plural
the money that is obtained from doing something or selling something
We sold the business and bought a villa in Rasht with the proceeds.
proceeds of/from
The proceeds of the concert will go to charity.

to give something, especially money, to a person or an organization in order to help them
donate something to somebody/something
Last year he donated $1,000 to cancer research.

an organization that gives money, goods, or help to people who are poor, sick etc
ￚsee also charitableSeveral charities sent aid to the flood victims. charity event/walk/concert etc (=an event organized to collect money for a charity)
2
[uncountable] charity organizations in general
All the money raised by the concert will go to charity .
for charity
The children raised over £200 for charity.

a group of people who sing together for other people to listen to
He joined a church choir at the age of eight.

the first public appearance of an entertainer, sports player etc or of something new and important
somebody’s debut
He made his Major League debut as shortstop.
film/acting/directorial etc debut
His Broadway debut was ‘The Scarlet Pimpernel’.
debut album/CD/single etc
Their debut album was recorded in 1991.
debut match/performance etc
He scored in his debut match for the club.

formal
to arrange for something important to start, such as an official process or a new plan
They have decided to initiate legal proceedings against the newspaper.
Intellectuals have initiated a debate on terrorism.

▶MUSIC◀
to stand in front of a group of musicians or singers and direct their playing or singing
ￚsee also conductor
conduct an orchestra/choir
The orchestra is conducted by John Williams.
Who will be conducting?

—
sentiment
—
salvation
in the Christian religion, the state of being saved from evil