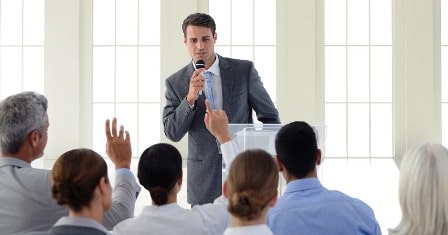 I had to give a speech last week.
I gave a speech to three hundred people.
I had to speak in front of a group of students.
I had to tell them about a campaign that we were having to raise money for cancer research.

Giving a speech can be a difficult thing.
When you stand in front of a big crowd,
you can get very nervous.
Some people feel like they have weak knees.
Their legs feel as if they are made of rubber.
Their heart beats very hard inside of their chest.
Their palms get sweaty.

Some people even become short of breath.
For some people, giving a speech is their worst fear.
When you give a speech, everyone is looking at you.
They are waiting to hear what you have to say.

When you have three hundred people looking at you; you have six hundred eyes that are on you.
It is a little frightening when you think of it that way.
Before I give a speech, I take three big breaths.
I calm myself, and I remind myself that what I have to say is important.
I like to be sure of what I am going to say, so I practice my speech in front of a mirror at home.
I like to look like I am relaxed and friendly.

They say that practice makes perfect; so the more speeches that you give, the better you will become at it.
Whenever I have to give a speech, I imagine that the audience is just one big person.

I look out into the audience until I find a friendly, smiling face.
I focus on that person, and I pretend that I am just talking to them.
I have become used to giving speeches.

I am more relaxed now than I used to be.
People tell me that I do not look nervous at all.
I like to hear that.

Sometimes I do feel a little flutter of nervousness, but I just ignore it and do the best that I can.
Giving a speech is not as scary as it appears to be.
Anyone can do it with a little practice.

a series of actions intended to achieve a particular result relating to politics or business, or a social improvement
*Florida was a key state in his campaign for re-election.

*Police have launched a campaign to crack down on drug dealers.
*https://salamzaban.com is having a campaign against illiteracy

a connected set of actions intended to obtain a particular result, esp. in politics or business:

*She fought a successful election campaign. * an advertising campaign
* The surgeon general has launched a campaign against smoking.
* He is a campaign coordinator for a well-known charity.

[uncountable] a substance used to make tyres, boots etc, which is made from the juice of a tropical tree or artificially
a rubber ball

▶PART OF HAND◀
the inside surface of your hand, in which you hold things
in somebody’s palm
*She looked at the coins in her palm.
*He held the pebble in the palm of his hand .

covered or wet with sweat
*We came home hot and sweaty after the day’s work.
*sweaty palms

*The audience applauded loudly at the end of the concert.
*Some members of the audience were shocked by the scenes of violence.
*an appreciative audience
*a TV program with an audience of 12 million viewers
*a writer should always consider his audience

used
be/get used to (doing) something
to have experienced something so that it no longer seems surprising, difficult, strange etc
*I do the dishes every day, so I’m used to it.

a flutter of something:

a sudden feeling that is not very strong
*She felt a flutter of curiosity.

Ignore:
to take no notice of; refuse to pay attention to:
*My advice was completely ignored.
*The administration would be unwise to ignore the growing dissatisfaction with its economic policies.

USAGE Compare ignore and be ignorant of:

He was driving very fast because he was ignorant of the fact that (=didn’t know) there was a speed limit. | He ignored the speed limit (=he knew about it, but paid no attention to it) and drove very fast.