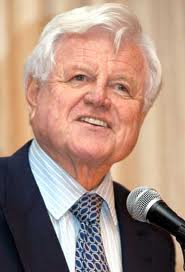 You and I have stood together many times, but no time has been more important than this. The campaign that stretches before us now is a struggle for the souls and the future of America. For we are more than a political coalition, more than a collection of programmes, more than the sum of our prospects and our strategy. Most of all, we are the trustees of a dream. Twenty years ago, in 1968, we lost two of the most powerful voices of that dream. But they left us their vision, their values, and the hopes they awakened.

In the countless millions of people whose hearts they touched, we remember them now to remind ourselves that the American journey is unfinished, that we stand for change in order to march again towards enduring ideals, that we do not have to settle for things as they are. Martin Luther King Jr told us something we need to hear anew. He said, ‘We are now faced with the fact that tomorrow is today. We are confronted with the fierce urgency of now, in the unfolding life and history. There is such a thing as being too late.’ And Dr King also said, ‘We must work unceasingly to lift this Nation to a higher destiny, to a new plateau of compassion.’ And in that time there was another voice, only briefly heard, but whose words too have outlasted all the loss in years.

Robert Kennedy said, ‘Each time a man stands up for an ideal, or acts to improve the lot of others, or strikes out against injustice, he sends forth a tiny ripple of hope. And crossing each other from a million different centres of energy and daring, those ripples build a current that can sweep down the mightiest walls of oppression and resistance.’ He was my brother. But he and Dr King were also in the deepest sense brothers to us all. These two, these valiant two, lived for the same dream and were gone only months apart. And if they were here with us, two decades later, I think I know what they would say: ‘Now is the time. Some men see things as they are and say, why? We dream things that never were and say, why not? Now is the time.’