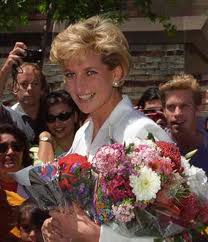 Diana, Princess of Wales: ‘A Modern Tragedy And It’s Consequences’ (2)

As the Red Cross have expressed it: “Each victim who survives, will incur lifetime expenses for surgery and prosthetic care totalling between 2,000 and 3,000.” That is an intolerable load for a handicapped person in a poor country. That is something to which the world should urgently turn its conscience. In Angola, one in every 334 members of the population is an amputee! Angola has the highest rate of amputees in the world. How can countries which manufacture and trade in these weapons square their conscience with such human devastation? My third main experience was to see what has been done, slowly and perilously, to get these mines out of the earth.

In the Kuito and Huambo region I spent a morning with small team from Halo Trust, which is training Angolans to work on the pervasive minefields and supervising their work. I speak of “our team” because men of the Mines Advisory group – or, in this instance, the Halo Trust – who volunteer for this hazardous work are usually former members of our own Services. I take this opportunity to pay my tribute to the work these men do on our behalf – the perils they encounter are not just confined to mines. Two members of the Mines Advisory Group team in Cambodia, Chris Howes and Houn Horth, were kidnapped by the Khmer Rouge a year ago and their fate is uncertain. We can only pray for their safe return. Much ingenuity has gone into making some of these mines.

Many are designed to trap an unwary de-miner. Whenever such tricky mines appear, the de-miner will call in one of the supervising team, who will then take over. That is what keeps their lives perpetually at risk. It might be less hazardous, I reflected, after my visit to Angola, if some of the technical skills used in making mines had been applied to better methods of removing them. Many of these mines are relatively cheap – they can be bought for 5 apiece, or less. Tracing them, lifting them, and disposing of them, costs far more – sometimes as much as a hundred times more. Angola, is full of refugees returning after a long war. They present another aspect of this tragedy. The refugee turns towards home, often ignorant of conditions in his homeland.

He knows of mines, but homeward bound, eagerness to complete the journey gets the better of him. Or he finds mines on what was once his land, and attempts to clear them. There were many examples of that in Angola. These mines inflict most of their casualties on people who are trying to meet the elementary needs of life. They strike the wife, or the grandmother, gathering firewood for cooking – They ambush the child sent to collect water for the family I was impressed to see the work being done by many of the world’s agencies on “Mine Awareness.” If children can be taught at school, if adults can be helped to learn what to do, and what not to do in regions that have been mined, then lives can be saved and injuries reduced.