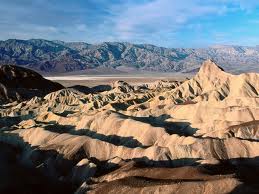 The steep mountains of southeastern California dip suddenly into a deep valley. Rain is kept out of the valley by the high mountains, which form its western slopes. Although mountains surround the valley, Death Valley itself is very low. In fact, its lowest point is 282 feet below sea level, the lowest point of land in North or South America. Death Valley is about 140 miles long, but only a few miles wide. It got its name in 1849 during the California Gold Rush. Gold seekers attempted to cross Death Valley on the way to California’s gold fields, and some died of thirst there. There is hardly any water in the Valley. The average rainfall is only a couple of inches a year. It is also one of the hottest places in North America in the summer. Temperatures of 134튔 have been recorded. As a result of this heat and dryness, Death Valley is a desert. These conditions give rise to the Valley’s most important products – mineral salts and salt deposits. One of these products is borax, which has many industrial uses.

Borax was removed from the desert using 20 mule teams hitched in a long string. Later, a railway was built to help carry out these minerals. In spite of its desert conditions, Death Valley has considerable animal and plant life. Of course, its animals and plants are those typical in desert conditions. Only on the salt flats do plants refuse to grow. With even a small rainfall in the spring, the desert will come alive with wild flowers. Very few places in the world have such a contrast in heights and depths. The mountains near the Valley are among the highest in Continental U.S.A., while the Valley itself is the lowest elevation. Mount Whitney at 14,495 feet is less than 100 miles from Death Valley. The climate in the Valley from October to May is generally pleasant. Since Death Valley is now a national park, many tourists visit during this season. Now roads and hotels provide comfortable access. Death Valley is located close to the Nevada border. Its desert conditions are common throughout the area of the American west just east of coastal mountains. In most cases, heavy rain falls along the coast, but very little in the interior. Because there is no farming and water is hard to obtain, Death Valley and similar desert areas have very few permanent residents.

(Often slopes) a part of the side of a hill or mountain, especially as a place for skiing:
A ten-minute cable car ride delivers you to the slopes
A steep slope
a gentle (=not steep) slope
She looked back up the grassy slope
We got to Tahoe on Friday, and hit the slopes (=skied on them) the next day.
He climbed the steep slope
The house was built on the side of a mountain
Synonyms: incline, side

Borax
A white compound which occurs as a mineral in some alkaline salt deposits and is used in making glass and ceramics, as a metallurgical flux, and as an antiseptic.
A hydrated sodium borate; chemical formula: Na2 B4 O7 10H2 O

The offspring of a donkey and a horse (strictly, a male donkey and a female horse), typically sterile and used as a beast of burden

Hitched
(With object) fasten or tether
He returned to where he had hitched his horse
Harness (a draught animal or team)
Thomas hitched the pony to his cart
Hitch something to something
He hitched our pickup to his trailer.
a goat hitched to a fence
I hitched up the horse and drove out into the fields.