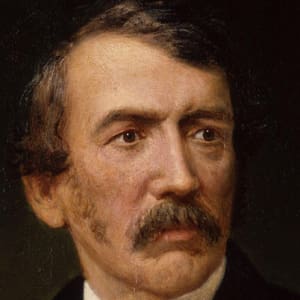 During the reign of Queen Victoria (1837-1901), British people traveled around the whole world. They charted the seas, mapped out distant countries and studied plants, animals and people. They also claimed many lands for England. This kind of international travel was made easier by improved transportation and communication. New inventions such as steamships, trains, telegraphs and telephones made long distances seem smaller.

Of course, people had different reasons for going to distant lands. Some were businessmen who saw economic opportunities overseas. Soldiers wanted fame and a chance to enlarge the British Empire. Big-game hunters wanted to be the first to shoot strange animals and bring back trophies to England. Scientists intended to study unknown animals and plants. Missionaries planned to be the first to introduce Christianity to faraway people. In 1836 a young Scotsman called David Livingstone began to study medicine in Glasgow.

Livingstone intended to become a medical missionary. This means that he would be a doctor, as well as a preacher and teacher. Livingstone (1813-1873) came from a poor family. From an early age, he had worked 14 hours a day in a clothing factory for very little pay. But he was determined to learn. He took his books with him to the factory and read as he worked. Then, after work, he would go to his teacher to learn more. Livingstone’s goal was to teach faraway people about Jesus. However, unlike some missionaries, he was also interested in science, geography and exploring. He had planned to go to China in 1839, but because of the Opium Wars no missionaries were being sent there. Instead, he asked to go to South Africa.

Europeans had traveled around the coasts of Africa for hundreds of years. But very few white people had traveled inland. A missionary named Robert Moffatt who had begun a mission at Kuruman in the interior inspired Livingstone. Livingstone arrived in Kuruman in 1841. This was the farthest outpost of white settlement, and no one seemed to want to go further inland. Livingstone felt that the missionaries should go to the Africans, rather than waiting for the Africans to come to them. With a fellow missionary he set out. When they came to an African tribe, they would talk to the chief and ask permission to preach to his people.

Livingstone would also set up a tent and treat the people who had diseases. After a while, he would move on to the next tribe. Once Livingstone learned the Bantu language he would talk to many Africans. But sometimes he needed interpreters. There were many diseases, including malaria and sleeping sickness. Livingstone suffered much of his life from river fever. He was also so weak that he rode on the back of an ox.

Livingstone wanted to stop the slave trade. At this time, the slave trade was the most profitable business in Africa. Livingstone hoped that if other kinds of trade were developed, then slavery could be abolished. In order to open up trade, he wanted to find an easy route into the center of Africa. Livingstone kept going further into the interior. He was probably the first European to cross the Kalahari Desert before reaching Lake Ngami in present-day Botswana.

Not long after, he traveled further inland. He explored the sources of the Zambesi and Kasai rivers and eventually reached the west coast of Africa at Luanda, Angola. Livingstone was being criticized for neglecting missionary work in order to explore. Livingstone replied that he was opening up the continent for missionaries. Meanwhile, he was becoming famous as a great explorer. The British government commissioned him to explore the Zambesi River. They hoped that ships could sail up the river into the interior.

Unfortunately, the Zambesi had too many rapids. However, Livingstone did find a route up the Shire River to Lake Nyassa. He continued to struggle against the slave trade, which was now being taken over by Arabs. Livingstone died in Africa in 1873. He was the first white man to explore Botswana, Zimbabwe, Zambia, Malawi and surrounding areas. He was not only a great explorer, but also a fine doctor and a good missionary. Nowadays, the countries that Livingstone visited are nearly all Christian–just as he hoped they would be.

reign
the period when someone is king, queen, or emperor
reign of
changes that took place during Charlemagne’s reign
the reign of James I
2
the period when someone is in charge of an organization, team etc
during his reign at the Education Department
3
a period during which something is the most powerful or most important feature of a place
reign of
the reign of Stalinism in Russia
4
reign of terror
a period when a ruler or a government kills many of their political opponents

—
chart
to make a map of an area of land, sea, or stars, or to draw lines on a map to show where you have travelled
—
fame

the state of being known about by a lot of people because of your achievements
win/achieve/gain/find fame
Streisand won fame as a singer before she became an actress.
rise/shoot to fame
Plant shot to fame in the seventies as the lead singer of Led Zeppelin.
international/worldwide/national fame
At that time, the Beatles were at the height of their fame .
The town’s only claim to fame (=the only reason why it is well known) is that Queen Elizabeth I once visited it.
He set off to find fame and fortune .
of … fame
(=used to show what someone is famous for) Hugh Grant, of ‘Notting Hill’ fame

trophy something that you keep to prove your success in something, especially in war or hunting
A lion’s head was among the trophies of his African trip.

literary a long distance away
ￚsynonym distant
She dreamed of flying away to exotic faraway places.
faraway noises

relating to the work of missionaries
missionary work a missionary hospital

—
preacher
someone who talks about a religious subject in a public place, especially at a church
—
treat

▶ILLNESS/INJURY◀
to try to cure an illness or injury by using drugs, hospital care, operations etc
ￚsee also treatment It was difficult to treat patients because of a shortage of medicine.
treat somebody with something
Nowadays, malaria can be treated with drugs.

someone who changes spoken words from one language into another, especially as their job
ￚsee also translator Speaking through an interpreter (=using an interpreter) , Ahmed said, ‘I’m very worried about my wife and children’.

—
sleeping sickness
a serious tropical disease that is carried by the tsetse fly (=a type of insect) . It causes extreme tiredness and fever, and makes you lose weight.
—
abolish

to officially end a law, system etc, especially one that has existed for a long time
Slavery was abolished in the US in the 19th century.

Look at these examples:
—
route a chosen direction or line of travel between one place and another: What’s the shortest route from New Haven to Boston? | The school is on a bus route. (=buses go past and stop) | to plan one’s route | the busy transatlantic air routes | (fig.) the surest route to disaster/to success
—
the interior

the part of a country that is farthest away from the coast
The interior of the country is mainly desert.

in a direction away from the coast and towards the centre of a country
The mountains are five miles inland.

We set off inland.
—
neglect

1 to give too little attention or care to: a neglected garden | You’ve been neglecting your work.
2 to fail (to do something), esp. because of carelessness or forgetfulness:

Don’t neglect to lock the door/locking the door when you leave.
—
continent
any of the seven main large masses of land on the Earth: the European continent | the continents of Africa and Asia