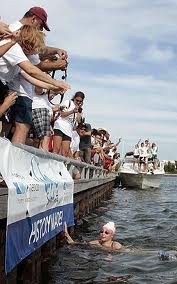 In 490 B.C. the Greek runner Phidippides ran the 24 miles from Marathon to Athens to announce an Athenian victory. His endurance was so much admired that runners ever since have attempted to run similar long “Marathon” distances. In the twentieth century, however, long distance swimming has also attracted attention and admiration. To swim the English Channel or Juan de Fuca Strait between Vancouver Island and the mainland have become challenges for both male and female swimmers. In September 1954, some Canadian businessman from Toronto offered veteran Californian champion Florence Chadwick $10,000 if she could swim Lake Ontario. They felt sure that such a feat would attract large crowds. Chadwick had swum the English Channel in both directions. However, no one – neither man nor woman – had crossed Lake Ontario. It was a 32-mile swim through cold water and difficult currents. Two other women also decided to take up the challenge. One, Winnie Roach Leuszler, had also swum the English Channel. The other was a 16 year old girl named Marilyn Bell. The swimmers traveled to the mouth of the Niagara River on the south side of Lake Ontario. They would swim from Youngstown, in the U.S.A., and back to Toronto. Bad weather delayed the swim for several days. During the night of September 8th the weather cleared, and the swimmers entered the water before midnight. Guided by her coach’s flashlight, Marilyn swam through the dark water and soon passed Chadwick, who was lifted from the water after swimming 12 miles. Leuszler made it further, but she too eventually had to give up. Marilyn not only had to overcome her fears of the dark, but she was attacked during the night by blood-sucking lamprey eels. She was able to knock these off with her fist. As dawn approached, the winds and waves increased, and Marilyn’s weariness mounted. Her coach, Gus Ryder, passed her some corn syrup on a stick, and later gave her liniment for her tired legs. He wrote messages on a blackboard to encourage her to keep going. Sometimes, he tricked her into thinking that she was nearer to the shore than she was. Marilyn fell asleep in the water twice and had to be awakened. The second time, a friend of hers jumped into the water beside her, and swam with her for a distance. Because Marilyn’s strength was declining, she was being pushed off course by the currents. Although the direct route was 32 miles, Marilyn swam a total of 45 miles. The last few miles were extremely difficult. Marilyn’s family and the lifeguards felt that she should be taken out of the water. But her coach threatened to quit as her coach if the swimmer gave up. It was getting dark again, and the swimmer was barely conscious as she approached the shore. Thousands of people lined the shore hoping to touch her or get a picture of her. Marilyn’s supporters had to push the crowds back so they wouldn’t stop her from touching the shore. Finally, after 21 hours in the water, Marilyn reached land. The exhausted girl was rushed to an ambulance. She had lost about 20 pounds of her 120 pounds weight in the crossing. Finally she was able to sleep. Huge crowds came out to see her the next day, and two days later there was a parade in her honour through the streets of Toronto. Everyone admired the courage and endurance of the 16 year-old girl, who became the first person to swim across Lake Ontario.

1. A person who has a lot of experience in a particular area or activity1.The veteran American actor, Clint Eastwood
a veteran of countless political campaigns
the veteran leader of the socialist party

An action or a piece of work that needs skill, strength or courage
The tunnel is a brilliant feat of engineering.
To perform/attempt/achieve astonishing feats
That was no mean feat (= it was difficult to do).
They climbed the mountain in 28 days, a remarkable feat
an incredible feat of engineering
the woman who performed the feat of sailing around the world alone
It is no mean feat to perform such a difficult piece.

Bloodsucker: an animal or insect that sucks blood from people or animals
Blood-sucking: adjective [only before noun]
Bloodsucking insects

A long thin sea or freshwater fish that looks like a snake
There are several types of eel, some of which are used for food
Jellied eels

Pressure is mounting on the government to change the law.
The death toll continues to mount

We collected dry sticks to start a fire.
The boys were throwing sticks and stones at the dog.
Her arms and legs were like sticks (= very thin).

He could barely read and write.
The music was barely audible.
She was barely able to stand.
We barely had time to catch the train.

Ambulances rushed the injured to the hospital.
Relief supplies were rushed in.

______________
Parade
A public celebration of a special day or event, usually with bands in the streets and decorated vehicles