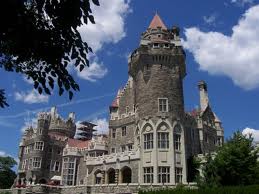 Many people visit Europe and see the old castles left from the days of knighthood. Very few return home with plans to build their own castle. Toronto businessman Henry Pellatt actually built such a castle – Casa Loma. Pellatt was born in Kingston, Ontario in 1859, but the family soon moved to Toronto. His father opened Toronto’s first stock broking firm in 1866. Pellatt Sr. became part of Toronto’s financial elite.

And Henry Pellatt eventually joined his father in business. The young Pellatt was especially attracted by the military and the British armed forces. When Henry was 18, he joined the Queen’s Own Rifles, a militia unit. He was soon one of the soldiers sent to suppress a railway strike. At 21, he was made an officer, and gradually moved up through the ranks, eventually becoming brigadier general. Meanwhile, Henry was learning the stock broking business. He soon showed considerable ability at forming new companies.

Electricity was a recent invention, and Pellatt hoped to be among the foremost developers. In 1883, he founded the Toronto Electric Light Company, and later was an owner of the Toronto Electric Railway. He also made money as a land speculator in the Canadian West. Unlike many businessmen of the time, however, Pellatt believed in community service. He sponsored many charitable organizations and supported various good causes. In spite of his business dealings, Pellatt found time to tour England and Europe regularly.

He brought back ideas for a “castle on the hill.” Pellatt’s castle, however, would not be a damp, drafty castle of the Middle Ages. It would have all the latest technology. Construction of “Casa Loma” began in 1910 and was completed in 1914. Outwardly, it looked like a mediaeval castle, but inside it was comfortable and luxurious. There were 98 rooms, three bowling alleys, 30 bathrooms, 25 fireplaces and 5,000 electric lights. It had an electric elevator and an indoor swimming pool.

There was a library of 100,000 books, a temperature-controlled wine cellar, a shooting gallery, and a large art collection. Pellatt ordered only the most expensive materials and employed the best craftsmen. The cost of all this was $3.5 million, a huge sum in those days. Pellatt and his wife liked to entertain.

They often opened up Casa Loma for special events. Sometimes, he would invite all 1,000 men from the Queen’s Own Rifles over for the weekend. The Pellatts also held parties for the staff. Pellatt had hoped that Casa Loma would be the center of an extensive subdivision. He hoped that wealthy people would build grand homes nearby, and so he had bought up land near his castle. Unfortunately for Pellatt, most of the people coming to Toronto were poor immigrants who couldn’t afford large houses.

Pellatt was unable to sell his land holdings, and his income declined. In 1924, Pellatt turned Casa Loma over to the City of Toronto because he could not pay his property tax. All the contents of Casa Loma went on auction soon after. His $1.5 million collection of art and artifacts sold for only $250,000. Now Casa Loma is a leading Toronto tourist attraction. “The castle in the middle of the city” has 400,000 visitors each year. It is the closest thing in North America to a real European castle.

a group of people who have a lot of power and influence because they have money, knowledge, or special skills
political/social/economic etc elite
the domination of power by a small political elite
a struggle for power within the ruling elite

—
militia
a body of men (militiamen) not belonging to a regular army, but trained as soldiers to serve only in their own country if it is attacked or in times when there is violence and disorder in towns, cities, etc.
—
suppress

▶POSITION IN ARMY/ORGANIZATION◀
the position or level that someone holds in an organization, especially in the police or the army, navy etc
rank of
officers below the rank of Colonel
He held (=had) the rank of Chief Inspector.
rise to/be promoted to/attain the rank of something During the war Harold had risen to the rank of major. high/senior/low/junior

rank an officer of junior rank
He was sentenced to prison and stripped of his rank (=had his rank taken from him) .

a high military rank in the British Army, or the person who has this rank

the best or most important
ￚsynonym leading, top

one of the country’s foremost authorities on chemical warfareRostropovich was long considered the world’s foremost cellist.
—
speculator

someone who buys goods, property, shares in a company etc, hoping that they will make a large profit when they sell them
a New York property speculator

work that is not paid that someone does to help other people, sometimes as punishment for a crime
Her care of the retired people in the home is an outstanding example of community service.

—
charitableconcerned with giving help to the poor: a charitable institution | charitable donations
—

dampslightly wet, often in an unpleasant way
Wipe the leather with a damp cloth.
a cold, damp day
______________________
drafty with cold currents of air blowing through: a drafty bedroom

according to the way people or things seem
ￚopposite inwardly

Calvin remained outwardly calm, but inside he was very angry.
Outwardly, at least, he was an optimist.

connected with the Middle Ages (=the period between about AD 1100 and 1500)
These spices were first brought to Italy from the East in medieval times.
a medieval castle

The cabin was luxuriously furnished.
—
fireplace

used or happening inside a building
ￚopposite outdoor

1
a room under a house or other building, often used for storing things
ￚsynonym basementa coal cellar
2
a store of wine belonging to a person, restaurant etc
ￚsee also salt cellar

1
a place where people shoot guns at objects to win prizes
2
American English informal an empty building in a city, where people buy illegal drugs and inject them

—
craftsman
someone who is very skilled at a particular craft (a job or activity in which you make things with your hands, and that you usually need skill to do)
—

the things that are inside a box, bag, room etc
contents of
The customs official rummaged through the contents of his briefcase.
Most of the gallery’s contents were damaged in the fire. contents insurance (=insurance for things such as furniture that you have in your house)
_______________
auction

a public meeting where land, buildings, paintings etc are sold to the person who offers the most money for them
at auction
The house was sold at auction.
put something up for auction (=try to sell something at an auction)
This week 14 of his paintings were put up for auction. auction house (=a company that arranges auctions)
_______________
artifact

an object such as a tool, weapon etc that was made in the past and is historically important
ancient Egyptian artefacts

best, most important, or most successful
The army played a leading role in organizing the attempted coup.
the leading industrial nations
a leading heart specialist
leading members of the government