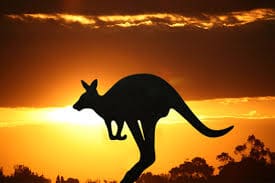 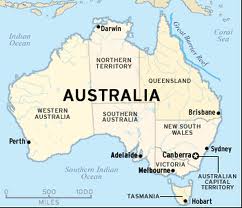 In many countries, leading families proudly trace their ancestors back to some significant group of people. In the U..S.A., prominent individuals may boast that their family came over on the Mayflower in 1620. In England, ladies and gentlemen are happy to announce that their ancestors came to Britain with William the Conqueror in 1066. In Australia, however, many leading families are reluctant to talk about their origins. In fact, many years ago, one Australian city burned its early records, so that no one would know who their ancestors were. The reason for this is that Australia began its history as a British penal colony. In eighteenth century England, there was a large gap between the rich and the poor.

To make matters worse, many farmers had been forced off their land by powerful landowners. These homeless people wandered to the cities, where employment was often hard to find. Frequent wars gave temporary employment to young men as soldiers and sailors, but when the war was over, they were no better off than before. As a result, theft was extremely common. To protect themselves, the upper classes made theft punishable by hanging. The problem with this was that juries were often reluctant to hang someone for stealing something small, and might declare the person “not guilty.” For example, if a man or woman stole a loaf of bread to feed their children, the jury might just let them go.

To prevent this, the courts came up with a new category of punishment– exile or “transportation.” If the judge or jury was reluctant to sentence the accused to death, they would ship them far away from England across the seas. However, if the person was found back in England again, he or she would be hanged. At first, England sent its convicts to America’s Thirteen Colonies. However, when the United States declared its independence in 1776, this was no longer possible. England considered sending criminals to West Africa, but the land and climate were considered unsuitable. So finally Great Britain decided to use the huge, almost uninhabited, country of Australia. At this time, not a single European was living anywhere on the continent. In the fall of 1786, a fleet of English ships began to take convicts on board.

This process continued till the sailing date of May 13, 1787. Many British jails had been cleared of both male and female prisoners. Since the convicts were technically under a sentence of death, there was little concern for making them comfortable. At first, the convicts were chained below decks, but later some were released when well out to sea. One man had been sentenced for the theft of a winter coat; another for stealing cucumbers from a garden; a third for carrying off a sheep.

Among the women, one was guilty of stealing a large cheese; another of taking several yards of cloth. These ships known as “The First Fleet” carried 1,442 convicts, sailors, marines and officers. The fleet finally arrived at Botany Bay on January 10, 1788. Later that month, they moved down to Sydney Harbour. No preparations whatsoever had been made. The forests came right up to the shore. Soon, the fleet members were cutting down trees and trying to put up tents. It was June 1790 before further supplies arrived from England.

Meanwhile, many convicts suffered from sickness, aggravated by lack of good food. In conclusion, Australians need not be ashamed of their origins. In time, great things were achieved, in spite of the almost complete lack of help from the English government. Many ex- convicts became respectable settlers who began prosperous farms and businesses. The members of the First Fleet, whether convicts or not, deserve to be honoured as the founders of Australia.

leading
most important; chief; main: He was one of the leading composers of his time. | a leading role in the new movie
—
Trace
—
ancestor

a member of your family who lived a long time ago
ￚsee also descendant
My ancestors were French.

to talk too proudly about your abilities, achievements, or possessions
‘I wouldn’t be afraid,’ she boasted.
boast that
Amy boasted that her son was a genius.
boast about
He’s boasting about how much money he has made.
boast of
The company is inclined to boast of its success.

—
reluctant
unwilling, and therefore perhaps slow to act: reluctant helpers | He gave a reluctant promise.
They were very reluctant to help. (=but probably did help)
—
penal

relating to the legal punishment of criminals, especially in prisons
the penal system penal colony/settlement (=a special area of land where prisoners are kept)

1
the crime of stealing
ￚsee also thief, burglary, robbery Car theft is on the increase.an arrest for petty theft (=stealing small things) Three men were charged with attempted theft .
2
an act of stealing something
There have been a number of thefts in the area.
theft of
the theft of £150 from the office

the act of killing someone by putting a rope around their neck and dropping them, used as a punishment
public hangings

a situation in which you are forced to leave your country and live in another country, especially for political reasons
in exile
a writer now living in exile
He went into exile to escape political imprisonment. force/drive somebody into exile The house was raided and the family was forced into exile.He spent many years in enforced exile. voluntary/self-imposed exile She had been in voluntary exile since 1990.

a group of 12 ordinary people who listen to the details of a case in court and decide whether someone is guilty or not
the members of the jury The jury found him not guilty.the right to trial by jury sit/serve on a jury (=be part of a jury)

1
a group of ships, or all the ships in a navy
the US seventh fleet
2
a group of vehicles that are controlled by one company
fleet of
a fleet of taxis

—
marine
a soldier who serves on a ship, especially a member of the Royal Marines or the US Marine Corps
—
whatsoever

used to emphasize a negative statement
ￚsynonym whatever
He’s had no luck whatsoever.

The lack of rain aggravated the already serious shortage of food.
Building the new road will only aggravate the situation
Their debt problem was further aggravated by the rise in interest rates.
pneumonia aggravated her illness

rich and successful
a prosperous landowner