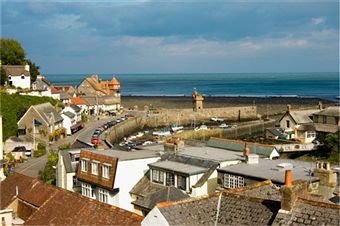 I grew up in a small town. There were only about two thousand people who lived in the town where I grew up. When a town is very small, it is also called a village. My village was surrounded by many farms and many lakes.
The house where my family lived was near the middle of the town. On the street where we lived, most of the houses were similar in size, but many of them had different shapes and different colors. Each house was surrounded by a yard, where people grew their lawn and their garden.
Often, I would walk from my house to the downtown part of the village. “Downtown” is the area where the stores and shops of a town are located. Because I lived in a small town, it was a short walk to the downtown area. Along the main street, there were several different kinds of stores. Some stores sold food, some stores sold clothing, and some stores sold hardware (or building supplies).
It was also a short walk to the schools in my town. When I went to elementary school, it would take about ten minutes to walk to the school. Some of my friends lived on the same street where I lived. Sometimes, we walked to school together.
During the summer months, many people came from the big city to visit our village. The people liked to get away from the busy streets of the city. They enjoyed the quietness and the slow pace of village life. They also liked to spend their vacations near the lakes that were near the village. People from the city often said that people who live in villages seemed very friendly.
When I grew up, I left my village, and I went to work in a larger town. But sometimes I like to go back and visit the place where I grew up.

to or in the centre or main business area of a town or city
ￚsee also uptown I have to go downtown later.

ￚdowntown adjective [only before noun] downtown restaurants She works for a law firm in downtown Miami.

hardware:
equipment and tools for your home and garden