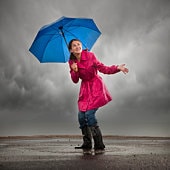 The clouds were very gray. There was a loud boom that came from the sky. A bolt of lightning struck down a tree. All of a sudden buckets of rain came pouring down!
Jane and Bill were walking in a park when the rain started. Jane wanted to take pictures of the flowers, but the rain got her camera wet. She had to put it away so that it wouldn’t get ruined.
Jane was going to hide under a big tree to stay dry, but Bill told her that was not a safe idea. He said that she could get hurt if the lightning hit the tree. The tree could break and fall on her, or the lightning could even hit her!
The air was very chilly. Jane and Bill put on their sweaters and raincoats to keep warm. Jane took her umbrella out and put it up. They both walked under it to stay dry.
The ground was really wet and muddy. Bill and Jane were very glad that they remembered to wear their boots. They ran through the puddles, getting mud and water all over the back of their pants.
As they were running and having fun, they saw some ducks. There were five of them splashing around in a pond. The ducks were not afraid of water; they swim in the water all the time!
Jane and Bill saw some big bull frogs near the pond. The frogs jumped into the pond when they heard Jane and Bill coming.
After a little while Jane and Bill decided to go home. They got into some dry clothes. Jane started to sneeze. She had gotten a little bit too wet!
Bill noticed that the rain had stopped. “Look outside Jane,” he said. Jane wrapped a blanket around her shoulders and looked outside. There was a beautiful, bright rainbow across the sky Violet, blue, green, yellow, orange and red, the rainbow shone high in the sky. “I wonder if there’s a pot of gold on the other side?” Jane asked. She had once been told that Leprechauns lived on the other side handing out money to those that made it to the rainbow’s end.
Bill didn’t believe there was a pot of gold. Jane ignored Bill though and started off across the field, to claim her big pot of money.
Let’s hope Jane finds her way back home, safe and sound, with a big pot of gold!

boom:
▶SOUND◀
[countable] a deep loud sound that you can hear for several seconds after it begins, especially the sound of an explosion or a large gun
the dull boom of the cannons

bolt of lightning
a bolt from the blue 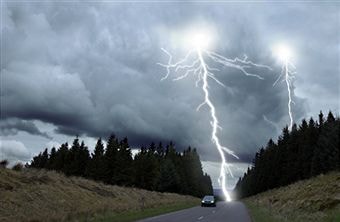 lightning that appears as a white line in the sky
There’s not much left of his house after it was struck by a bolt of lightning .

struck
the past tense of strike

▶HIT◀
[transitive] written to hit or fall against the surface of something
She fell heavily, striking her head against the side of the boat. A snowball struck him on the back of the head. Several cars were struck by falling trees. The last rays of the setting sun struck the garden windows.

bucket:
also bucketful
the quantity of liquid that a bucket can hold
bucket of
a bucket of water

splashing:
if a liquid splashes, it hits or falls on something and makes a noise
splash against/on/over
The ocean splashed against the pier.

pond:
a small area of fresh water that is smaller than a lake, that is either natural or artificially made

clothes
the things that people wear to cover their body or keep warm
I enjoy shopping for clothes and shoes.What sort of clothes was he wearing ? casual clothes put on/take off clothes She had a shower and put on clean clothes. change your clothes/change into clean/dry etc clothes The kids ran upstairs to change into dry clothes. work/school etc clothes men dressed in ordinary street clothesa clothes shop

also wrap up
to put paper or cloth over something to cover it
wrap something in something
The present was beautifully wrapped in gold paper.
wrap something around somebody/something
Ella wrapped a thick coat around her shoulders.
He wrapped a bandage around my injured wrist.
I’ve still got a few Christmas presents to wrap up. 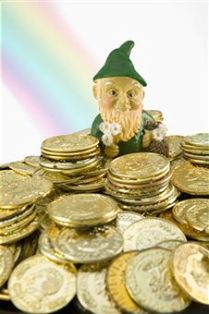 an imaginary creature in the form of a little old man, in old Irish stories