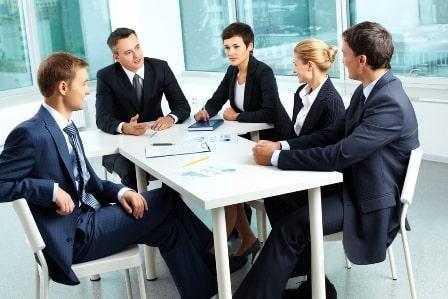 “I’ll finish the feedback form after my meeting.”
“I’ll be in meetings all day today.”

“I have five meetings today, so I won’t have time to help you with this now. Let’s set up a time for tomorrow.”

“We finished late because John had problems with his computer during the presentation portion of the meeting.”

“Are you going to the company meeting next week?”

“I hate meetings. I think they are a waste of time. I’m an engineer, not a planner.”
“I don’t know why I have to go to those meetings. I never learn anything from them and I never say a thing.”

“I can’t believe our weekly meeting is at six o’clock in the morning. I hate waking up that early.”

“If I skip that meeting, I wonder if anyone will notice.”

“That meeting was hilarious. I can’t believe the manager forgot John’s name.”

“I get so sleepy at meetings.”
“I almost fell asleep during that meeting.”

“I had a hard time keeping myself from laughing. I saw you falling asleep during the meeting.”